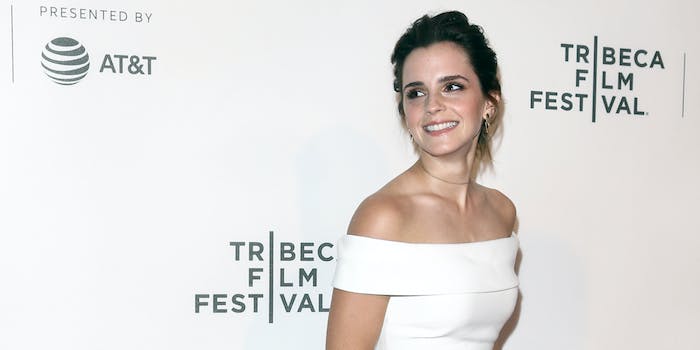 After spending much of the past year off of social media, Emma Watson posted her first series of tweets in months to address a three-month-old tabloid story.

Back in February, the Daily Mail published an article that quoted Watson’s agent, who called Watson’s career “dormant” and noted that she “is not taking on any new commitments,” which harkened a call to the “dormant” message that had been on Watson’s Instagram account for months.

The Daily Mail article insinuated that Watson had retired from acting entirely and was instead spending more time with Leo Robinton, to whom she was allegedly engaged. (She had been spotted with a plain ring on her left hand, making the engagement rumors swirl even more.) While Watson’s manager would debunk the story about Watson’s retirement a few days later, the mere suggestion that Watson—who was a beloved movie star to an entire generation of fans thanks to her role in the Harry Potter films—had retired was enough to get Watson’s name to trend on Twitter and for fans to celebrate the highs of her career.

Soon enough, the story disappeared as the internet’s collective attention turned toward other celebrity stories or gossip. But nearly three months later, Watson is tweeting once again to push back at the rumors about her career and her love life were “ways to create clicks.” (And, in effect, it’s bringing back a story that some of her fans might have already forgotten about.)

“Rumours about whether I’m engaged or not, or whether my career is ‘dormant or not’ are ways to create clicks each time they are revealed to be true or untrue,” she wrote. “If I have news – I promise I’ll share it with you.”

As for what she’s been doing over the past year during the pandemic? Watson says that she’s been spending it the same way that many of us have. She’s been baking sourdough bread (and failing at it), caring for other people in her life, and trying not to spread a virus that’s killed millions of people around the world.

She ends her series of tweets by sending fans and essential workers well wishes.

“I am sending so much love to you, hoping you’re ok and as well and happy as you can be in these strange times,” she tweeted. “And again, thank you to everyone working so hard to keep us safe and well.”

Even before British tabloids speculated on the end of Watson’s career, she wasn’t one to constantly post to social media. When she did post, it was often to share updates or information about causes she supported.