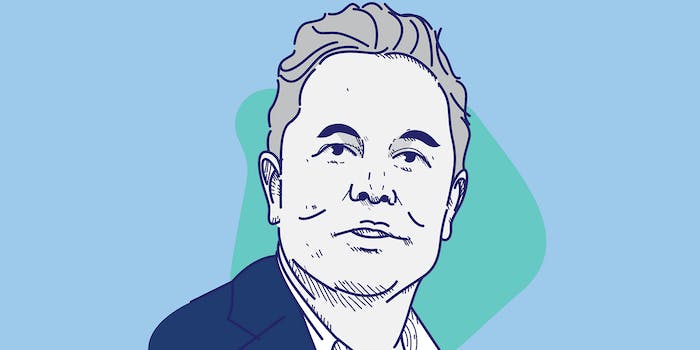 The autistic community does not want Elon Musk to represent them

'Huge win for the ableism movement.'

While hosting Saturday Night Live over the weekend, Elon Musk announced to the world that he’s autistic by incorrectly claiming that he’s the show’s first-ever openly autistic host—and a lot of autistic people really wish he hadn’t.

During his opening monologue, Musk addressed his rising unpopularity, seeming to blame it on a combination of jealousy over his “achievements” and hatred of autistic people.

It’s unclear whether he actually believes it or whether he’s trying to use his diagnosis, and the ever-increasing awareness of and opposition to ableism, to dodge what little criticism his wealth and cis white male privilege doesn’t already deflect.

Regardless, many autistic people are concerned that his apparent lack of empathy, a tendency towards ethically questionable business practices, and tone-deaf Twitter behavior are all going to be blamed on his diagnosis—and then projected onto everyone else with autism as a result.

The fact that he chose to identify himself as Aspergic rather than autistic has also rubbed a lot of the community wrong. While Asperger’s was still in use as a diagnostic label until relatively recently, there are very good reasons for its retirement. The distinction between autism and Asperger’s was first made by Nazi pediatrician Hans Asperger and was intended to separate people on the autistic spectrum into two categories —those who could be useful to neurotypical society, and those to be euthanized.

Though some older people and ESL speakers still use the Asperger’s label because it’s what they’re used to, choosing to identify that way is often met with suspicion due to this. Especially as there is a history of “aspie supremacy” within the broader autistic community, as some of those with the Asperger’s diagnosis attempted to paint themselves as distinct and superior to those with other spectrum diagnoses.

Given Musk’s recent proposition to “solve” autism via Neuralink, his neural-technology company that hopes to install microchips in people’s brains, people are finding his choice of self-identification suspect for all sorts of reasons.

There are plenty of autistic people out there who are funny as fuck (Hannah Gadsby and previous SNL hosts Chris Rock and Dan Aykroyd come to mind). Elon Musk just isn’t one of them.