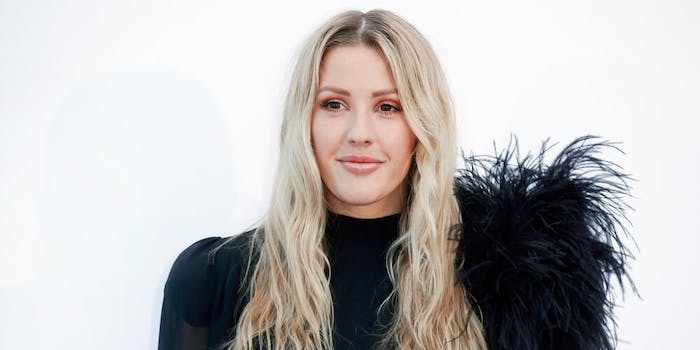 The pop star rushed to the scene.

Even if there were no celebrities involved, this would be incredible. But when you have a wild car accident and celebrities, you had better believe the internet is going to take notice.

When YouTuber Jack Joy of Car Throttle found his Volkswagen Golf t-boned by a truck and then pushed a half-mile down the road, who came to her aid but popstar Ellie Goulding!

A viral video shows how a truck crashed right into a Volkswagen Golf, but the top of the car was low enough that the driver didn’t even notice.

It took a number of good samaritans driving by honking their horns and waving the driver down before the Rail Mail delivery trucker realized what had happened. By that point, he had already pushed the Volkswagen Golf for a half-mile.

A number of bystanders chastised the driver and began recording the incident, but it was Goulding, who happened to be driving by in her Range Rover, who first checked to see if the driver was OK.

Millions of people have watched the video, many quickly identifying Goulding and Joy from their more planned video fame. Joy’s involvement in the crash was first confirmed by British presenter Alex Kersten. Joy later said that he’s doing “alright” but he can’t say the same for his car.

To everyone asking, yes, this is Jack from Car Throttle.

Happened this morning. Jack minding his own business in the slow lane, lorry driver failed to look properly when changing lanes, jack-knifing Jack's GTi and pushing him 0.5 miles down the road 😯

Jack is shaken but ok. pic.twitter.com/5Ix6WFAB3e

Goulding commented on the crash via Instagram story. She wrote, “I can’t believe the first instinct of other drivers was to instantly start filming on their phones, and shout abuse at the poor shocked driver, not even checking if the other driver was okay.”

Joy and the other man in the car walked away unscathed. The Royal Mail has stated that it is “very concerned about this incident,” and will be investigating it as a matter of urgency.

Here’s hoping that in our moment of need, we all get the pop star good samaritan we deserve.