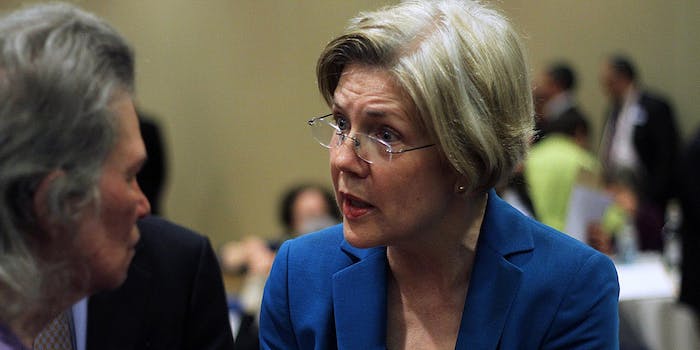 It could usher in a whole new era of progressivism.

If Elizabeth Warren has her way on expanding Social Security, Americans might learn a valuable lesson—namely, that you can be a political game-changer without running for president. Perhaps more importantly, if supporters of Social Security expansion utilize the Internet to its fullest potential, they could fundamentally transform not only one of America’s landmark entitlement programs, but also the Democratic Party as well.

While this online movement laid the groundwork for Social Security expansion, the issue is making headlines today because of a bold move by Elizabeth Warren: On March 27, the senator from Massachusetts introduced an amendment calling for an expansion of Social Security benefits to the Senate’s non-binding budget resolution.

If this doesn’t seem particularly notable in its own right, keep in mind that Democrats have spent decades tacitly agreeing with fiscal conservatives that the entitlement program was overdue to be cut, even though they differed as to when and how. When Warren added her amendment, however, all but two of the present Senate Democrats voted for it.

“Congress can and often does ignore budget resolutions, but they are a significant statement of priorities and principles, and the amendment process can be an important game of politics,” wrote Pema Levy of Mother Jones. “By introducing this amendment, Warren forced senators to take a position on the popular retirement program.”

From a policymaking standpoint, this means that the Democrats who supported her amendment (i.e., a majority of those in the Senate) are openly backing the idea that somber right-wing warnings about the program’s imminent demise are overblown. Although Social Security has started paying out more than it collected in revenue, tax increases on the wealthy could theoretically cover the difference just as easily as cutting costs.

While it remains to be seen whether Americans will agree with Warren’s premise that it is acceptable to raise taxes on the wealthy in order to expand Social Security, up until recently that position has lacked a prominent advocate in mainstream political debate. Thanks to her amendment, Warren has already gone a long way toward changing that.

Additionally, she has quite possibly changed the dynamic of the 2016 presidential race, regardless of whether she chooses to enter it herself. “When [Hillary] Clinton last weighed in on Social Security, she supported a bipartisan commission to tackle the program’s long-term financial imbalance,” reported Laura Meckler of the Wall Street Journal. “The widespread view was that such a commission would lead to a compromise in which Democrats support benefit cuts in return for Republican support for a tax increase, all to extend the life of the program.”

With Clinton expected to announce her presidential candidacy later this month, she will undoubtedly be expected to weigh in on Warren’s amendment in the near future. What’s more, because Clinton has a five-to-one advantage over all of her prospective opponents, the odds are better than not that she will be the Democratic presidential nominee next year.

As such, Warren has placed the proverbial ball will be in the Internet’s court. The only question is which reactions will be appropriate and that, in turn, heavily depends on what position Clinton decides to take.

If Clinton stands by her original position, the digitally active voters who were instrumental in fueling Barack Obama’s upset victory over her in the 2008 Democratic primaries could galvanize behind this issue. While such efforts may not hurt her chances of being nominated this time around, they would certainly be an unwelcome distraction for her campaign. To silence them, Clinton would need to guarantee that progressives like Warren will share a spot with centrists and conservatives at the negotiating table the next time Social Security appears on the chopping block.

On the other hand, if Clinton decides to move her position closer to Warren’s, she would usher in a monumental shift in Democratic party politics. Ever since her husband’s election in 1992, the Democratic Party has adopted economic policies significantly to the right of what it had advocated for the previous sixty years (i.e., after FDR’s administration pushed American politics to the left by ushering in the Fifth Party System).

Although the decline of the Democrats’ centrist wing initially became apparent during President Obama’s first term, it would be reinforced if the political dynasty that first pushed the party to the right felt the need to make such a significant leftward policy alteration.

Should that happen, the Internet would assume another role in Clinton’s campaign—namely, holding her accountable for her new stance. Internet conservatives have already chronicled Clinton’s long history with alleged flip-flopping and dishonesty, and as online news sites and social media continue to supplant traditional outlets as Americans’ main source of information on current events, this trend toward hyper-accountability will only continue.

While Clinton certainly has the right to change her mind on an economic question as monumental as Social Security reform, it will be necessary for her to explain her shift as persuasively as, say, Bill Clinton managed to be when explaining his support for the repeal of “Don’t Ask, Don’t Tell.”

If nothing else, the burden will rest with the Internet to make sure that Warren’s amendment has a meaningful effect. If the digital activism that mobilized a movement behind Social Security expansion last year—and spread awareness of Warren’s amendment two weeks ago—remains diligent, they could pressure the eventual Democratic nominee into not only helping millions of senior citizens, but reverse more than two decades of economic centrism in the process.

Should they slack on the issue, however, it is likely that Social Security expansion could go the way of so many other valid policy ideas and gradually fade into the background.

Photo via Mystery Pill/Flickr (CC BY 2.0)