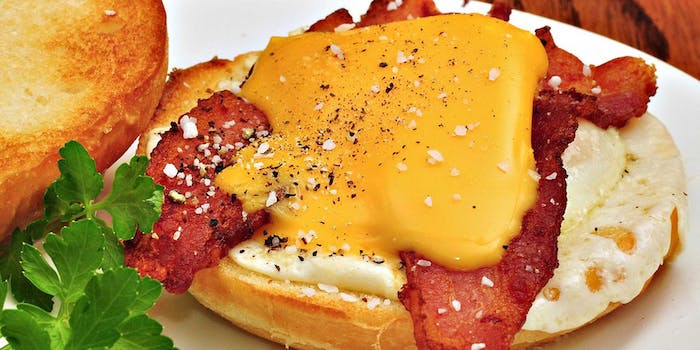 This brave New Yorker is trying to save the egg sandwich

Saving breakfast one sandwich instruction leaflet at a time.

At last, there is a Kickstarter project to deliver us from the middling breakfast sandwich.

“At some point, certain delis started making egg sandwiches in a less delicious way,” writes New York-based reporter Joseph Checkler on his Kickstarter page. “I want to revisit the time where they were more delicious.”

Checkler has lived in New York for 11 years—more than 10 years longer than I, though I grew up in New Jersey, so I think I know a thing or two about egg sandwiches.

“I definitely have had great egg sandwiches at delis and bodegas, I just have had more ordinary experiences lately that made me yearn for the days where they were consistently better.”

Checkler has surpassed his $310 goal, which he will put toward delivering “instructional leaflets” to every egg-sandwich maker in Midtown Manhattan. “There’s not ONE right way to do this,” he writes, “but my guidelines will at least make an average egg sandwich much better.”

Those guidelines include the following demands: “If the customer ordered meat, reheat FRESH sliced sausage, or, if they ordered bacon, ask whether they’d prefer it crispy or juicy. Cook accordingly. Time it so the meat is done just as the egg is ready to go on the roll.”

Oh, and also: “Place egg on the roll, cheese side UP (I said down earlier), and season the non-cheese side with salt and pepper.”

It certainly takes some… gumption, let’s say, to presume the authority to deliver leaflets to tell food-service workers in what is probably the busiest part of New York City how they could be doing a better job. Can you even imagine how many egg sandwiches are made from 55th Street down to 33rd Street, between 9th Avenue and Park Avenue—Checkler’s initial target area for his leafleteering project—every morning? It has to be close to infinity egg sandwiches.

“I’ve never worked in food service but”—whoops wait a minute, let me stop you right there, ha ha, just kidding, go on—“I DEFINITELY want to say I applaud how hard the people in the industry work,” Checkler told me. “One of the articles about this whole thing suggested that I want overworked deli workers to work harder or something and that’s ridiculous, and misses the point of this entire exercise, which is to get everyone thinking about how we, together, can have better breakfast sandwiches.”

But Checkler might be missing the point: the crappiness of these sandwiches is part of their appeal. The crappy egg sandwich and a crappy cup of coffee sets a baseline crappiness to which anyone who lives and works in New York City must adapt or else GTFO. “We, together,” indeed.

The existence of the crappy egg sandwich lends weight and significance to its counterpart, the good egg sandwich. One of life’s simplest pleasures is finding the place where you like the way they do it, which, over time, could become Your Place, where you are a Regular and have The Usual, and you can take someone new there, to introduce them to something that you think is special and good, maybe even The Best. “They make the best egg sandwiches at this place,” you can say to someone. “So good.”