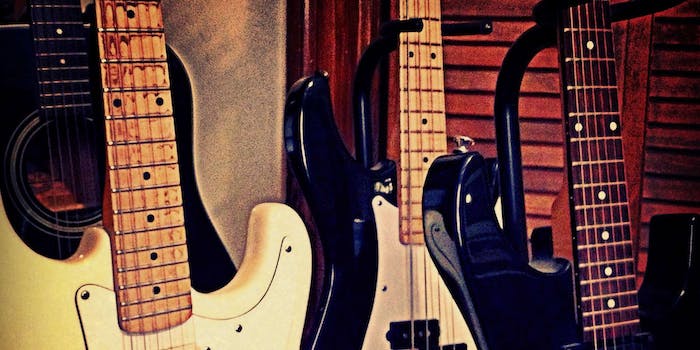 For the sleaziest guitar shop on eBay, sex sells

BloomingJungle has made his business selling guitars and tube amps by modeling them next to unnecessarily scantily clad women.

Sex sells, and it doesn’t even matter what it is it’s selling. Be they guitars, cars, coffee makers, or Webcor Stereo Audio Vintage Face name plates, if you throw a pretty lady in front of the object, you’ll stand a much better chance of turning a profit.

That’s the line of thinking arrived upon by one eBay seller, at least. Thanks to a tip from Austin-based rock band My Jerusalem, we’re now lucky enough to revel in the delight that is BloomingJungle‘s corner of the online auction marketplace.

The anonymous seller, who sports a picture of the New York Dolls’ Johnny Thunders and Jerry Nolan as his profile shot, has made his business selling guitars, tube amps, and all sorts of other guitar-related items by modeling them next to unnecessarily scantily clad women, many of whom probably wouldn’t know a ’74 Fender Telecaster if it smacked them on the tail feather.

There are 89 on these in total, with models modeling everything from custom Epiphone Les Pauls with SG bodies to tiny little tubes for vintage amplifiers that hardly scream sexy.

What’s even more amazing is that the individual behind the BloomingJungle account boasts a 100 percent positive feedback rating, with reports coming out of comment land suggesting that he’s a “good buyer” who puts an emphasis on “prompt payments” and “good communication.” “Super cool to deal with,” wrote one guy or gal who bought a drum machine. “Bid with confidence.”

Good deal, though we’re way more concerned with where he found all these women to stand for photos with stuff like this.

For those wondering if BloomingJungle ever sells anything that’s not attached to a scantily clad woman: He does! Towards the bottom of his item list lies a 23-piece Hot Wheels set that’s yet to garner a bid.