This weekend’s hottest Facebook event: Eating By Yourself at McDonald’s

It's the perfect follow-up to a holiday full of overspending.

Congratulations: You’ve survived your typical Thanksgiving routine of arguing with relatives, eating too much food, and spending wildly beyond your means on Black Friday. What next?

Never fear—on Saturday you can reject all forms of companionship, denounce healthful eating, and take back your empty wallet. That’s right: It’s time to eat cheap fast food while totally alone and depressed.

Eating By Yourself At McDonalds (Because You Have No Friends) is the brainchild of a Facebook user called Holiday Gerry, who created the event last week for local friends in Chicago, presumably so they could all eat by themselves at McDonald’s. The event, which starts promptly at 5pm CT, went viral, because let’s face it, everyone knows that McFeel.

In the week since its creation, the event has called forth heroic icons of the sport of eating alone in fast food restaurants. It’s also inspired serious strategic planning, including lots of depressed polls. There are the important aesthetic questions, like whether Neutral Milk Hotel or Sufjan Stevens goes better with abject misery and french fries. And, of course, there are competing optimistic events that no one is going to because we all hate happiness. 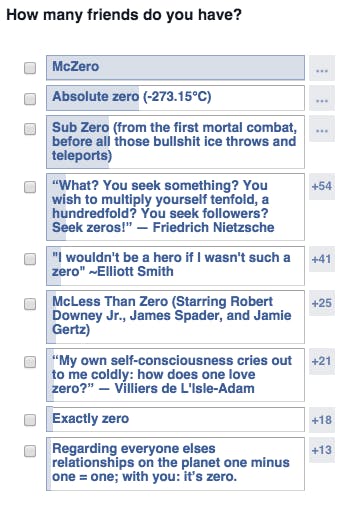 But the event has also raised an obvious but pressing existential question that plagues its participants. Paradoxically, 45,000 people on Facebook have invited their friends to come join them in eating alone at McD’s. How can this be?

Holiday Gerry was clear that the goal of the endeavor is to wallow in isolation: “There[‘]s nothing to joke about here,” they instructed one baffled consumer. “Just solitary McEating.”

Is it really solitary if we’re all doing it together? No matter how we apply science to this problem, it doesn’t make sense. Clearly, the only solution is to go to the event and observe our findings. After all, McDonald’s is doing one of those peel-and-win games. And we could really go for a quarter pounder.

And yet… this is how it starts. Once Black Friday was probably just a single 10 percent discount in a lone J.C. Penny’s—now it’s a line out the door on Thursday. Before we know it, people will be lining up on Friday to Eat Alone at McDonald’s on Saturday. There’ll be bloodshed and ketchup spills in the melee. We’ll lose something of ourselves—something vital that once thrilled to every Happy Meal and thrummed to the joyful whiff of a fresh vat of fries coming off the greaser. Soon enough we’ll be going through the motions, eating alone at McDonald’s on Saturated Fat Saturday simply because it’s what we do, performing yet another listless perfunctory act that allows us to pretend that Thanksgiving weekend has any value beyond its commercial significance to a handful of lucky corporate entities gobbling up our souls and our paychecks. Sure, we’ll be inviting our friends to join us in not eating together, in sitting down to munch silently and defiantly on our McRibs; inside, though, we’ll be longing for more. We’ll be yearning to cross the divide, to join hands and greet one another, to go outside—to maybe cross the road and find a Chuck E. Cheese or even an IHOP.

Of course it will be too late. The machinery of pointless seasonal rituals will have already done its work. We’ll be stuck, in the hopelessly ironic memes of our own bitterness—eating alone, together. Forever.