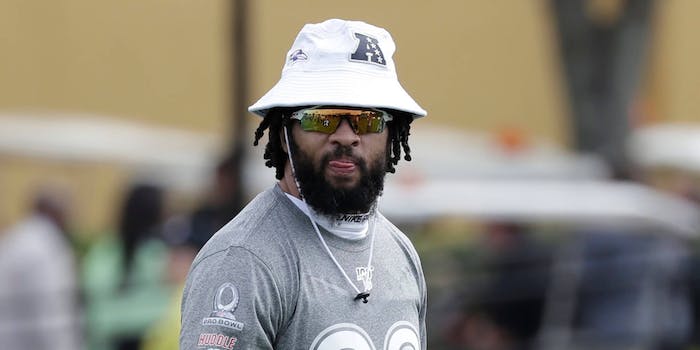 The memes were savage.

NFL star Earl Thomas’ wife, Nina Thomas, held him at gunpoint after she caught him cheating with another woman thanks to Snapchat, TMZ reports.

Court documents indicate that on April 13, the Austin Police Department arrived at a home where officers “observed that a black female wearing an orange sweater with a knife in her hand, later identified as Nina Thomas, was chasing a shirtless black male, later identified as Earl Thomas, with a pistol in his hand around a vehicle.”

Nina told police that her husband had left their house earlier that day following an argument about his drinking. Nina logged into Earl’s Snapchat account, tracked his location to a nearby Airbnb, and found video of him with another woman. She then enlisted two other women, grabbed Earl’s pistol, and headed to the Airbnb to confront her husband.

When she got to the scene, she said she found Earl and his brother, Seth Thomas, naked in bed with other women. Nina then brandished the pistol, which she said she didn’t know was loaded, pointed it at her husband’s head, and yelled, “I got something for all you hoes!”

One of her friends was reportedly wielding a knife during the showdown as well, for good measure.

Earl ultimately wrestled the gun away from his wife, and cops arrested Nina and the two women with her.

It was a harrowing standoff for the Baltimore Ravens free safety, one that will probably take extensive counseling to reconcile. But it was also a cautionary tale about getting sloppy with Snap Map, which has surely betrayed the locations of countless users who wished to remain anonymous.

Thomas addressed the altercation in an Instagram video last night.

“It’s really not anybody’s business. It pisses me off that it got out, but that’s the world we live in today,” he said. “Stuff like this happens, bro. We try to live the best lives we possibly can, but sometimes they don’t go as planned. Just pray for us as we go through this stuff.”

Incidentally, today is Thomas’ 31st birthday. Acknowledging that his new year got off to a less-than-stellar start, he captioned his Instagram post, “Obviously this is not how I wanted my birthday breakfast to start out or my birthday but it is what it is.”