The 11 dumbest things that 30 percent of Americans believe

Still, it got us thinking: What other misinformation does roughly a third of this great nation believe? The answers, we soon found out, are as disheartening as they are stupid. Get ready to rage.

1) That gay people can choose to become straight.

Although public opinion on matters of homosexuality has grown steadily more progressive, the pace remains a bit glacial. In 2012, a Pew poll found that 35 percent of respondents considered sexual orientation a lifestyle choice. Just last week, Texas Gov. Rick Perry likened homosexuality to alcholism, suggesting that while people may have “genetic coding,” it’s still boils down to personal desire. He later said he “stepped right in it” with the comparison. That’s putting it mildly.

In 2006, the Washington Post ran the results of a questionnaire that indicated 30 percent of Americans didn’t know what year 9/11 took place—though 95 percent could correctly identify the month and day. Not bad, considering the phrase “9/11” denotes exactly that information.

3) That their jobs really matter.

Roughly 30 percent of Americans report that they feel “engaged” in their careers. We’re guessing these replies came exclusively from guitarists and zookeepers who work with otters.

4) That the Bible is the literal word of God.

Yes, some three in 10 Americans believe there’s a book so true that God himself could not write it, and instead relied on prophets to be his (infallible?) secretaries—according to Gallup, anyway. Almost half the country, meanwhile, thinks the Bible is merely “inspired” by the word of God, and not necessarily to be taken at face value. 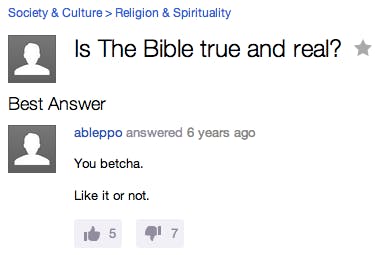 5) That they aren’t the product of evolution.

“I didn’t come from no monkey!” —people with an inexplicable prejudice against monkeys, or about 33 percent of the U.S., according to Pew Research.

6) That medical care is too expensive to seek out.

The cost of getting well in the U.S. is certainly outrageous, but the 30 percent of citizens who prefer to “walk it off” are probably just forestalling even more punishing health-related debt.

7) That the time has come for armed revolution.

You know those people who seem to buy more guns than they could possibly need? Well, it seems they’re stockpiling: Fairleigh Dickinson University’s PublicMind last year had some 29 percent of poll respondents saying that a bloody fight against the U.S. government “isn’t just imminent but imperative.” That’ll be fun.

8) That global warming is mainly caused by “natural changes in the environment.”

In other words, it causes itself. Very convenient.

Turns out people are letting their friends decide which (mis)informative sites and articles they access on a daily basis—despite the fact that 30 percent of Americans haven’t seen a single one of their Facebook friends IRL in the past three months. How social. 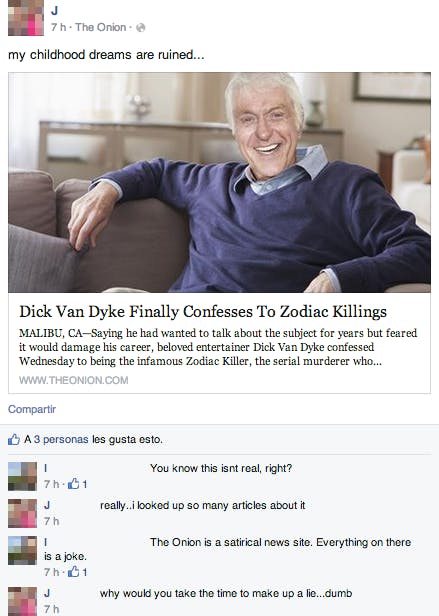 10) That the Pacific Ocean does not appear on a world map.

Only 71 percent of Americans could find it, with the rest presumably complaining about that big patch of blue covering up most of the planet’s eastern hemisphere.

11) That another war in Iraq is a good idea.

Vox is already calling B.S. on a Rasmussen report that appears to show that a significant plurality of Americans want to get more aggressive about fighting al-Qaeda in Iraq.

The last U.S. president not to bomb Iraq was Ronald Reagan