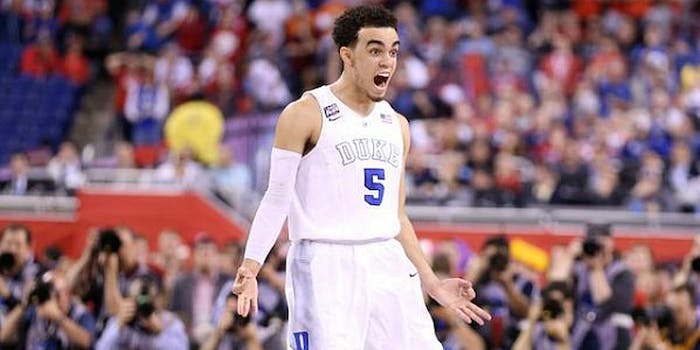 Duke wins national title, gets help from next player you’ll love to hate

Yes, you can continue to hate Duke. But once again, Duke showed off its pedigree.

With the team’s biggest star, Jahlil Okafor, on the bench in foul trouble, Duke had to turn to a little-used freshman who seems destined to be the next Blue Devils star we all agree to hate.

That’s probably because freshman guard Grayson Allen became a superstar in the second half of the NCAA basketball title game, combining with fellow rookie guard Tyus Jones to make play after play in the final period to lead Duke to a national title with its 68-63 victory vs. Wisconsin on Monday night.

Not only does Allen, who finished with 16 points, have the game to be the kind of player who draws the hate that Blue Devils luminaries like Christian Laettner, Bobby Hurley, and J.J. Reddick once endured, he also happens to have the face that could make a moderate (or liberal) squirm.

Regardless, Allen and Jones, who led all players with 23 points, kept the Blue Devils in the game with Wisconsin, and when Duke put Okafor and his four fouls back in the game with about three minutes to play, the potential NBA lottery draft pick scored four quick points (his first offensive output since the middle of the first half) to give the Blue Devils a five-point lead.

Wisconsin ended up cutting the lead to three but ran out of time. Which led to Duke’s fifth national title and this reaction.

Huge credit, of course, goes to Allen—who averaged 4.0 points and 8.9 minutes per game this season—and who could very well blossom into one of America’s Most Wanted.

Regardless of your future feelings to Allen, it was an extraordinarily exciting game, and for much of the night, it looked like Badger senior center Frank Kaminsky, who recorded 21 points and 11 rebounds, would lead Wisconsin to its first NCAA title since 1941. But Duke was too tough down the stretch.

And the Blue Devils did it in front of a crowd that seemed about 70 percent in favor of Wisconsin and which witnessed a tremendous treat while the National Anthem was being played.

It reminded me of this unsettling moment from my reporting past in Cincinnati.

Speaking of that eagle at Lucas Oil, I remember when a pigeon just fell dead to the floor at U.S. Bank Arena during an A-10 tourney.

I think the reason that pigeon fell dead to the floor at U.S. Bank was b/c it got caught in a fan high above. Plenty of feathers falling.

Even before the game, tensions ran high on Twitter.

And then Laettner—the man who most everybody STILL seems to hate—had something to say.

When the game finally tipped off, we expected the Kaminsky-Okafor matchup to be a hot topic of conversation, and immediately, it was clear these two players would have an immense impact in the game. This was what happened on Kaminsky’s first touch vs. what occurred on Okafor’s first touch.

Another still-frame shot of the charging foul.

All of it was enough to make the contact lens of Badgers guard Josh Gasser go flying (seriously, look closely at the below Vine. You can actually see his contact take flight).

According to CBS’s Tracy Wolfson, the contact actually was ripped in half. One half fell to the floor, while one half remained in Gasser’s eye. That doesn’t sound pleasant.

Although the Blue Devils took a six-point lead in the first half and threatened to pull away near the end of the opening period—Duke missed a wide-open 3-pointer that could have done so—Kaminsky converted a 3-point play while Okafor picked up his second foul to send Duke’s best player to the bench for the rest of the half and give the Badgers some strong momentum.

All of it made Texans defensive end J.J. Watt, who played at Wisconsin, very happy. Or perhaps that was just the result of Watt sitting next to, um, tennis star Caroline Wozniacki (?!?!?).

It was an excellent first half with 13 lead changes, and the teams entered intermission tied at 31-31.

But with Okafor and Justise Winslow saddled with two fouls entering the final 20 minutes, the Badgers could afford to be more aggressive on offense. Though Wisconsin took a nine-point lead midway through the second half (at this point, it was the Badgers that looked set to run away with the championship), Allen went on an eight-point scoring spree that put his team back in it. And then this happened.

A few minutes later, Kaminsky forced Okafor into his fourth foul with 9:18 remaining in the game, meaning the Blue Devils, already behind, would have to play much of the rest of the game without their best players.

None of that mattered to Allen and Jones.

“These guys love Grayson,” Duke coach Mike Krzyzewski told CBS after the game. “We were kind of dead in the water. We were nine points down, and Grayson put us on his back… Both [those] guys responded.”

Despite the heart-stopping nature of the game, Duke’s response in the final 10 minutes left so many fans—but one in particular—so very sad.