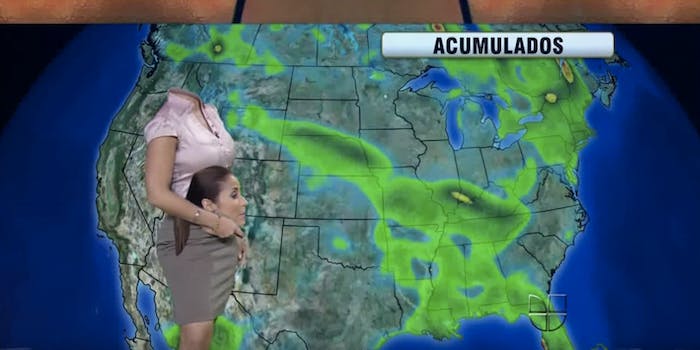 Why do people watch videos of women holding their own heads?

I’ll be the first one to admit that there’s a lot of exaggeration in this big, thirsty Internet of ours: “Ted Cruz Talking In Slow Motion Will Haunt Your Dreams!” I mean, no it won’t. It might be mildly amusing, but it’s never going to traumatize you.

That’s a lazy trope that out-of-gas writers use to try and drum up the same empty enthusiasm over clickable nuggets of content week after week. It’s dishonest, and it ends right now, because what I’m about to show you will legitimately haunt your dreams.

As you’ll see, this is a video of a Maria Menounos interviewed by Conan O’Brien. Her head has been lopped off and sits in her lap.

Yeah. This is what YouTuber Fartemus Dingleberry does. He uploads videos in which he has separated women’s heads from their bodies.

So… what the hell? Photoshops of headless women have been around for a while, and they seem to feed a fetish. Yet those older incarnations (mainly found on deviantART) are static images, not video, and rarely incorporate the heads themselves. Fartemus Dingleberry, by comparison, looks to be reshuffling body parts instead of simply erasing them.

Are we supposed to derive some greater meaning about the human body/the male gaze/the fragility of our spinal cords by watching these things? I don’t know. But it’s an undeniable portal into a corner of the human psyche. And there’s a ton of this stuff out there.

In the comments on one of these videos, for example, someone wrote, “if you’re into this, you should check out @girlgotnohead.”

There you have it: The Internet hosts a community that enjoys looking at women without heads. What you do with this knowledge is up to you.