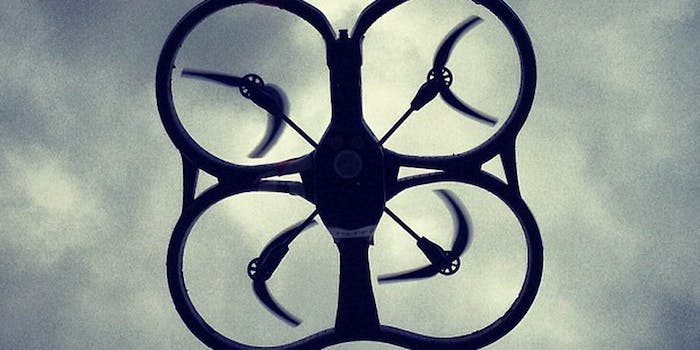 If Las Vegas stands for anything, it stands for excess—excessive gambling, excessive drinking, excessive Brittney Spears concerts. And there’s nothing that screams excess like flashy, unnecessary technology.

Enter the Marquee Dayclub at The Cosmopolitan Hotel, which has taken the concept of technological overkill to its logical extreme by marrying it to another long-held Las Vegas tradition: The club is offering bottle service via drone.

According to ABC News, the club’s drone bottle service launched over Memorial Day weekend. The drone is also equipped with a camera designed to take Instagram-worthy pictures of groups of club-goers who shelled out the requisite $20,000 for the privilege of getting bottles of champagne delivered by a flying robot.

Jason Strauss of the Marquee’s parent company, The Tao Group, told the Associated Press that the drone was initially brought in to take footage of the club’s patrons. The operators then came up with the idea of using the unmanned flying vehicle to deliver booze.

While what happens in Vegas is supposed to stay in Vegas, the Federal Aviation Administration (FAA) may ultimately beg to differ. The commercial use of drones is currently prohibited by government regulators. The FAA is scheduled to release the preliminary version of a long-delayed plan toward the end of this year that’s expected to open up tightly limited commercial drone use.

Marquee’s management did not immediately respond to the Daily Dot’s request for comment.

However, in the interim, the agency has gone after operations that are arguably far less commercial than poolside bottle service that costs as much as a car. For example, the agency has slapped a nonprofit, Texas-based search-and-rescue organization with a cease-and-desist order to using drones to search for missing hikers and attempted to fine a drone photography group contracted to shoot a promotional video for the University of Virginia.

So, even though the Marquee has said its drone is operated by trained professionals and comes backed with insurance, there’s a good chance that won’t be enough to keep the FAA from swooping in.