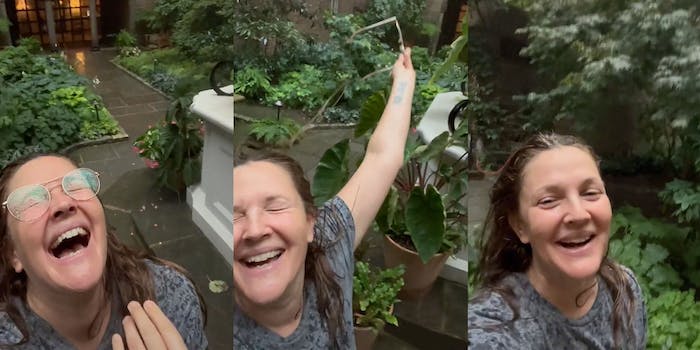 'Whenever you can go out into the rain.'

Sometimes, the small things in life can bring someone the most joy, something that Drew Barrymore seems to have fully embraced in a new video that’s leading to both memes and widespread appreciation for the actor and talk show host.

On Sunday, Barrymore posted a 13-second video of herself on Instagram and TikTok, laughing in the middle of heavy rain. Her joy is infectious as she takes off her glasses and takes in the experience before urging others to do the same.

“Whenever you can go out into the rain,” she said. “Do not miss the opportunity!”

It’s far from the first time Barrymore shared her excitement about the rain with her followers: In June, she shared several duets of other people taking in the joy of standing in the rain.

But whether you’re familiar with Barrymore’s style of videos (one of her recent videos showed her getting emotional over finding a hidden window during renovation) or just came across one of her posts, her happiness at a natural occurrence struck a chord with people.

“I want to love anything as much as Drew Barrymore loves everything,” Michael Brown wrote. “Perfection.”

Some people tried to imagine how Barrymore’s neighbors might react to witnessing her moment of joy.

Others weren’t as thrilled about being caught in a downpour as Barrymore.

But as Barrymore’s video spread across multiple platforms, people were mostly just thrilled that Barrymore was thriving. Some also referenced Barrymore’s history with drugs and alcohol as a child star in Hollywood as they countered criticism about Barrymore’s wealth as a celebrity.

“Also everyone knows the answer about ‘why Drew Barrymore is like that’ is literally ‘because she had a delayed and traumatic childhood marred by addiction and neglect and then through lots of therapy and self-work has become more appreciative/aware than a regular person’ right,” Angie Manfredi tweeted.

For her part, Barrymore has reshared several videos on Instagram Stories in which other people (including Camila Cabello) get in on the action of enjoying the rain. A simple move? Maybe. But one that’s nonetheless offering plenty of joy.