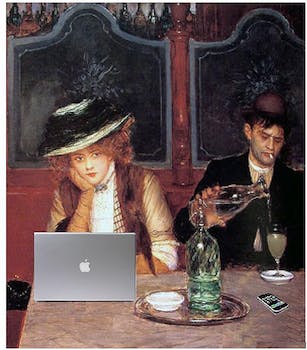 Down in the dating doldrums? How to laugh again

Dating can get everyone down. Here's a few links that'll have you remembering the humor in it all.

Dating, like anything in life, has its ups and downs… and like a lot involved in dating, those ups and downs can be extreme.

There is the high of having a giggly, flirty first date and kiss, and the low of having another once-promising prospect bite the dust.

What’s a nice gal/guy like you supposed to do when your dating atmosphere is thick with discontent?

First, don’t go on any dates. You’re only going to have dating success when you’re feeling cheery.

Second, lighten your world up with a little laughter. This finding-someone-special thing is going to be a whole lot easier if you let yourself see the humor in it. There is plenty funny about dating—and I’ve got the links to prove it.

1. So many gals I know describe their dream guy as someone who looks like a lumberjack (beard, plaid shirt) and acts like a kitten (meow). If that’s your kinda thing, you’re going to like The Dating Site Murderer, a.k.a. “The Good Intentions Axe Murderer.”

2. I once asked a guy to dance with me, and he replied, “My heart belongs to the sea.” Yes, really. It was rejection, but of the nicest kind. Meet other men who say the sea is their first love at Sea Captain Date.

3. I read the New Yorker for the cartoons…and the articles, I swear. I’ve taken to cutting out my favorite cartoon gems and sticking them to my fridge. So many of them sum up the hilarity and madness of dating.

4. Are you one of those people who says that dating is harder now than ever before? Well, you’re going to change your mind once you take a look at the male contestants in this episode of The Dating Game (circa 1960—with Maureen McCormick, otherwise known as Marcia Brady!) and this dating video compilation (circa 1980). The awkwardness is unbelievable.

5. And last but not least, my favorite stand up comedians have a few things to say about dating. Here’s Aziz Ansari on texting and Amy Schumer on condoms, body type, and girl prep time.

Laughter really is the best medicine. There is an arsenal of funny dating material out there—spend a few moments remembering the humor the next time you’re feeling down.