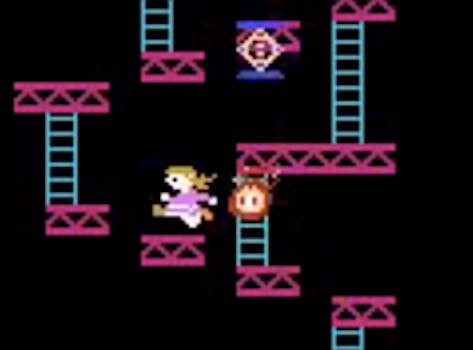 Another gamer has created a gender-friendly hack—this time, one that lets his 3-year-old become the heroine of another game classic: Donkey Kong.

Are open-source hacks the way to finally achieve gender equality in games?

Last year gamer dad Mike Hoye made ripples in geek culture when he genderbent the classic Legend of Zelda for his 3-year-old daughter. Hoye created a hack that swapped the gender pronouns for the game, so the hero, Link, became a girl.

Now, another gamer has created a similar gender-friendly hack—this time, one that lets his 3-year-old become the heroine of another game classic: Donkey Kong.

In an essay he wrote for Wired, game designer Mike Mika explains how much his daughter loves playing video games of all varieties. After playing as Princess Peach in Super Mario Bros 2—the only game of the series in which she’s a playable character—his daughter wanted to play the girl character in Donkey Kong as well.

But Donkey Kong only has one playable character, Jumpman, who later became Mario in his own franchise. Pauline, the female character, is in Atari’s 1981 hit solely to give Mario someone to rescue. But this time, for once, Mika’s daughter wanted to be the one saving the boy.

Mika explained that her subsequent question after returning to Donkey Kong had arrested him: “How can I play as the girl?” He swung into action, painstakingly swapping Mario’s tiny pixelated image for Pauline’s, chopping a few pixels off her height, and maneuvering her into the position of hero. His friends cheered him on from Facebook, where he shared his progress.

Two days after he started, he had a playable demo, which he shared via YouTube before showing it to his daughter. Almost immediately, he had a viral phenomenon: In three days, the video got nearly a thousand comments on social news site Reddit and gained 600,000 views.

The original Pauline comes from a long line of damsels in distress. Not only is her character based on Faye Wray’s helpless blond in the 1933 classic King Kong, but her game designer originally intended her to be Olive Oyl in a Popeye game. She’s so iconic that Anita Sarkeesian’s just-released Tropes vs Women in Video Games: Damsels in Distress features her heavily.

Now, in Mika’s version, she leaps, runs, fights, and does everything the Mario character can do—even die and return to life. Mika admonishes the heavy round of resentment his actions have stirred up in YouTube comments. Given what seems to be an endless backlash against the presence of women in geek culture, it’s not surprising that some gamers hate the idea of Mika’s daughter being a gamer, much less having a playable character who resembles her. But Mika had some things to say in response:

[H]aving a daughter is something special. I get the opportunity to see the world  j  nm76ythrough her eyes. And if this experience has taught me anything, it’s that the world could be just a bit more accommodating. And that if something as innocuous as having Mario be saved by Pauline brings out the crazy, maybe we aren’t as mature in our view of gender roles as we should be.

Although he says he isn’t trying to make any kind of statement, Mika did share the game hack with his friends and provided a download link for his YouTube viewers. For a non-statement, that’s pretty loud. As Howe put it when he spoke of his own changes to Zelda to the Daily Dot, “the culture around software isn’t carved in stone any more than the software itself is. If you’re a bit smart and a lot determined, you can make the changes you want happen.”

Gender equality as a part of open-source culture has long been a subject of interest among software developers. But with Howe and Mika setting a precedent for hacks to come, it looks like open-source changes to game interfaces could be a way to grant an agency that’s long-been denied female characters. Sure, it’s not the same as having more female characters as the heroes of their own stories, but it’s a start.

Now we just need someone to complete the old-school trilogy. Come on, computer geeks: “We’re sorry, Princess, but Mario is in another castle!”