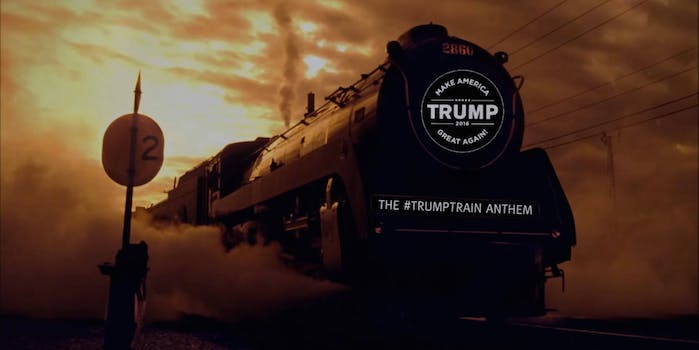 Supporters of the Donald turn to inspired ‘Trump Train’ anthems

Come on, ride it.

The “Trump Train,” which was once but a Twitter hashtag, has now become the Internet’s latest rallying cry for voters to support Republican presidential candidate Donald Trump—and ride that caboose to Washington, D.C.

On Tuesday, Trump himself shared a supporter-made video titled “The Trump Train – Join The #TrumpTrain,” from his Twitter account.

With “C’mon N’ Ride It (The Train),” by Quad City DJ’s bumping in the background, the video features clips of women and people of color toting Trump signage and apparel; supporters taking selfies, embracing the candidate, and speaking at rallies; and energizing B-roll of fireworks and majestic bald eagles.

The video, originally uploaded to YouTube on April 13, is by Twitter user and Trump supporter Mark F. From his Twitter handle @immigrant4trump. Mark shares his support with the hashtags #TrumpTrain, #Latinosfortrump, and #Asiansfortrump. Mark did not respond to a request for comment.

Around the 2:40 mark, the video gets serious. A haunting cover of “The Hanging Tree” from The Hunger Games: Mockingjay plays beneath title slides, taking swipes at “Lyin’ Cruz” and career politicians.

The song “The Trump Train Anthem” was published to YouTube by Nimble Navigator Productions in early March. Go the lyrics:

“Are you, are you, coming to the train,
led by a man who wants to break the chains?
Establishment is terrified: They can’t control his reign.
Let’s meet this year on the Trump train.”

Mark’s video isn’t the first instance of train-related support going off the rails for the GOP front-runner. On April 3, GorillaRadio.Tv published a different “Trump Train” video that used similar clips and photos, with the same spirited Quad City DJ’s hit.

“Get on board, or get run over!” the video description reads.

“The Trump train is coming, it’s just around the bend,” Mackey sings. “He’s going to be our president and make America great again.”

And let us not forget about the original “Trump Train” anthem by the TRUMPetts from September.

Given Tuesday night’s New York primary results, you may want to hop aboard before it’s too late.