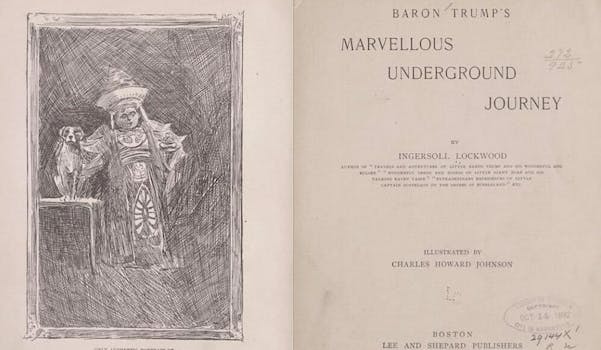 No, Donald Trump is not a time traveler from the 1800s—or is he?

Donald Trump’s presidency inspires a lot of questions. Usually, they are along the lines of “How did we get here again?” and “What the hell is going on in the White House today?” Lately, however, people have been investigating an overlooked topic: Is President Trump a time traveler?

Trump’s alleged time traveling abilities are a popular topic of discussion among Reddit and other online forums. It looked like just another conspiracy theory until people started pointing to a series of children’s books from the 1890s as evidence. Those books, by author Ingersoll Lockwood, follow a wealthy character named Baron Trump (here used as a title, not like the name of President Trump’s own son) who lives in a place called Castle Trump. The last book in this series is called The Last President, which some are reading as a possible foreshadowing of America’s future. Newsweek reported on all the other similarities between the fictional character and our current president, including the fact that Baron Trump travels to Russia “to locate an entrance into alternate dimensions.” Scenes from The Last President also seem chillingly familiar:

The story begins with a scene from a panicked New York City in early November, describing a “state of uproar” after the election of an enormously opposed outsider candidate.

“The entire East Side is in a state of uproar,” police officers shouted through the streets, warning city folk to stay indoors for the night. “Mobs of vast size are organizing under the lead of anarchists and socialists, and threaten to plunder and despoil the houses of the rich who have wronged and oppressed them for so many years.”

Still, all of this doesn’t prove that Trump is a time traveler. (If he was, he probably would have already bragged about owning or gaining access to a time travel machine by now.) Snopes debunked the theory in a recent post:

Time travel conspiracy theories such as this one pick and choose material that supports their conclusions while ignoring everything else. For instance, these books also contain giant turtles, alternate dimensions, a battle with a big white crane, a dog named Bulgar, and a little smiling man frozen in time. Since these aspects have no clear connection to the Trumps, they are omitted from the conspiracy theory.

Indeed, this theory is just another example of the internet running with something that fits a certain humorous narrative. If you look hard enough, you can probably find a piece of literature that has some parallel themes to any current public figure’s life. Anyway, you can read the books for free on Archive.org. A reviewer from July gave one of the titles five stars and wrote: “This book has consumed my life.” Let that endorsement guide you as it will.

But it doesn’t look like this is the last we’ll hear about the fictional Trump. One filmmaker, a self-proclaimed Trump supporter and a “huge fan of trolling,” wants to turn the books into a fantasy film. As of this posting, his IndieGoGo campaign has only met $2,876 out of its $100,000 flexible goal.

Maybe that’s a sign that some internet jokes should stay on the internet.