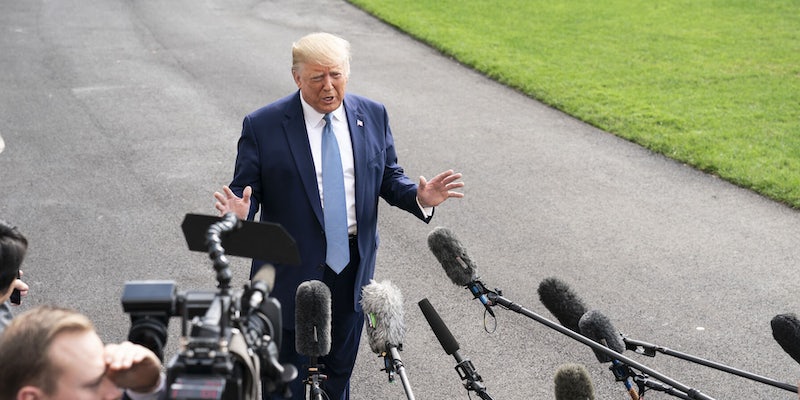 Many are calling on Trump to denounce the video, which played at his Miami resort.

An edited memetic video showing President Donald Trump shooting and attacking a number of news outlets and political opponents was shown during a conference at the president’s resort in Miami, according to a new report.

The New York Times reports that the video was shown at the American Priority conference at Trump National Doral in Miami last week. A spokesperson for the conference, which the news outlet described as pro-Trump, told the Times that the video was not associated with them, was submitted by a third-party, and was shown during a “meme exhibit” in a “side room.”

A spokesperson for Trump’s 2020 campaign told the Times that the video was not produced by the campaign and that they “do not condone violence.”

It also superimposes the logos of several news outlets onto many of the people the character with Trump’s face kills or attacks in the clip.

The news outlets placed on the heads of characters is similar to a clip Trump tweeted in July 2017, where he body slams a wrestler with CNN’s logo placed on his head.

The video drew swift condemnation from a number of places. CNN called for Trump and the White House to “denounce it immediately,” adding that “anything less equates to a tacit endorsement of violence and show not be tolerated by anyone.”

Similarly, the White House Corespondent’s Association also called on the president to denounce the video to “affirm that violence has no place in our society.”

The American Priority conference was held by American First Events, an organization that touts the importance of “open dialogue freedom of speech.”

The conference had a number of conservative-leaning breakout sessions and had Donald Trump Jr., Rep. Matt Gaetz (R-Fla.), and Florida Governor Ron Desantis (R) scheduled to speak, according to the conference’s website.

2020 Democratic hopeful Beto O’Rourke said the video “isn’t funny,” adding that it “will get people killed.”

At a conference of Trump supporters, they played a video of our president murdering journalists in a church. Last year, a Trump supporter sent bombs to CNN—and a shooter entered a church yesterday. This video isn’t funny. It will get people killed. https://t.co/XWtq1z38Kc

On Monday, White House Press Secretary Stephanie Grisham tweeted that Trump had not yet seen the video, but “based upon everything he has heard, he strongly condemns this video.”

Re: the video played over the weekend: The @POTUS @realDonaldTrump has not yet seen the video, he will see it shortly, but based upon everything he has heard, he strongly condemns this video.