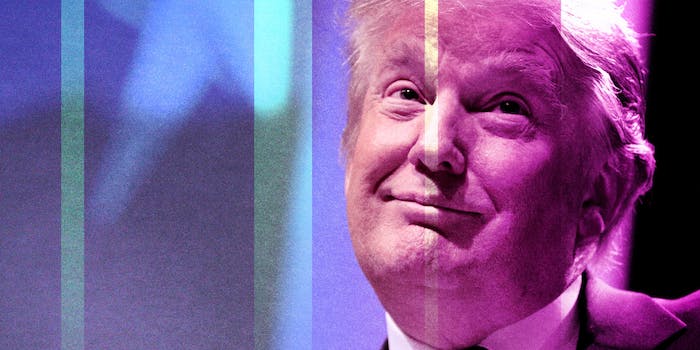 After reading this, would you want either of these men to be president?

When HarperCollins released a sequel to Harper Lee’s iconic To Kill a Mockingbird, fans were aghast at what had happened to hero Atticus Finch. The strong, wise, sensitive man who made it seem both normal and heroic for a Southern white man in his 50s to defend and befriend a black man falsely accused of raping a white woman had become a very different character. In Lee’s new book, Go Set A Watchman, Atticus is 72 and has apparently become racist as hell.

Real estate mogul and current leading Republican candidate for president Donald Trump, on the other hand, is the same man we always believed him to be: boisterous and belligerent. His most recent comments, like calling Mexican immigrants “rapists” and drug smugglers, have garnered plenty of attention and scrutiny, but they’re right in line with some of the awful things he’s said in the past.

So, here’s a little quiz. Without tapping into Google, can you determine which really racist comment from below was uttered by Atticus Finch, and which by Donald Trump? Give it a try—there’s five from each—and find out the answers at the bottom of this story.

Some of these questions might be easy to answer, but a few might give you trouble. Which is troubling in its own right, as one of the men in question doesn’t exist, but the other is running for president.

1) “The [racial minority] down here are still in their childhood as a people. … They’ve made terrific progress in adapting themselves to [the racial majority] ways, but they’re far from it yet.”

4) “You realize that our [racial minority] population is backward, don’t you? … You realize that the vast majority of them here … are unable to share fully in the responsibility of citizenship, and why? … But you want them to have all its privileges?”

5) “Do you want [racial minority] by the carload in our schools and churches and theaters? Do you want them in our world?”

7. “Do you want children going to a school that’s been dragged down to accommodate [racial minority] children?”

8. “I’d like for my state to be left alone to keep house without advice from the NAACP, which knows next to nothing about its business and cares less. That organization has stirred up more trouble …”

9. “Sadly, the overwhelming amount of violent crime in our major cities is committed by [racial minorities].”

2. Trump in 2011 during a radio appearance in New York

6. Trump, reportedly to John R. O’Donnell, a former Trump employee who wrote a biography of his former boss

Sadly, the overwhelming amount of violent crime in our major cities is committed by blacks and hispanics-a tough subject-must be discussed.

10. Trump, reportedly in conversation with O’Donnell