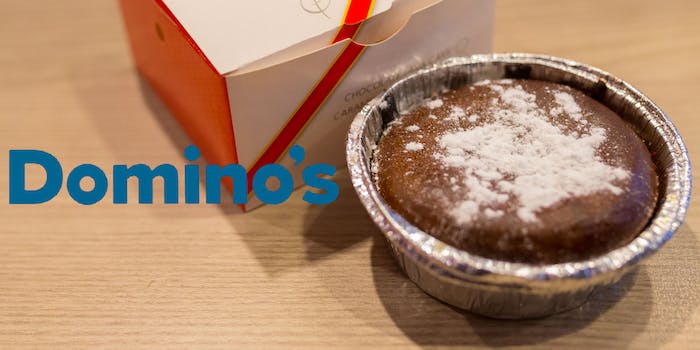 'All restaurants should provide them.'

In a viral video, TikToker Fi (@mymomstolemybong) sarcastically complained about Domino’s lava cakes and how there are now three cakes provided, instead of the usual two. The comments section is exploding with users who did not know about the change.

plus cinna sticks. not to mention i had to drive to pick up these items bc the delivery fee was out of my budget

The chocolate crunch lava cakes were introduced by the franchise in 2009. According to Domino’s site, you can get an order of 3 chocolate lava crunch cakes for $6.99. However, in the past, Domino’s sold 2 lava cakes for the price of $3.99.

In the comments section, users discuss the recent change and why it may have happened. It’s unclear why as of press time.

“Hey I just got fired from Dominos, they did it so they could put it with the 5.99 deal,” one user said.

“OMG you broke my heart because I thought I was special because I got three. I was [like] ‘oh how nice an extra lava cake. They must know how much I love them,” another user commented.

In response to another user’s comment, TikToker @themr.donutman said: “Used to be 2 for $3.99 then up to $4.99. apparently it’s now 3 to get rid of small boxes and put them on that stupid mix and match deal.”

The mix-and-match deal allows customers to select two or more items for $5.99 each. It is unclear when Domino’s made this change.

In a second video, Fi shared how she went back to Domino’s for more lava cakes.

“In this economy?” someone joked. “All restaurants should provide them,” another user added. The consensus is clear: The world loves lava cakes.

The Daily Dot reached out to Fi via TikTok comment, and Domino’s via email.