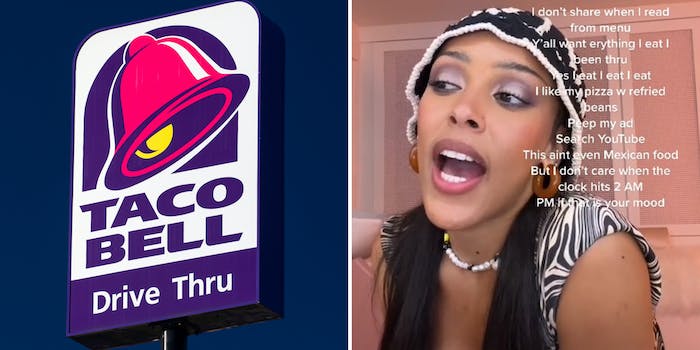 She's been calling Taco Bell to bring the fan-favorite item back for well over a year.

Taco Bell’s removal of Mexican Pizza from its menu upset plenty of people, but perhaps none more so than singer, rapper, and avowed Mexican pizza advocate Doja Cat. But her months-long campaign to get Taco Bell to bring back the fan-favorite might have finally come to fruition—at least courtesy of a TikTok.

Doja Cat is a fan of Taco Bell, at least enough to collaborate with the fast-food chain: Her songs have appeared in ads, and she recently starred in Taco Bell’s flashy Super Bowl commercial. But when Taco Bell announced that it was removing Mexican Pizza—which is compiled of ground beef and refried beans sandwiched between two tortillas with cheese and tomatoes on top—from the menu in late 2020 (the second time it was doing so in an attempt to streamline service during the COVID-19 pandemic), Doja Cat asked nicely to bring back the items she craved.

Since then, Doja Cat has tweeted about Mexican Pizza several more times, asking or demanding in a variety of ways for the return of Mexican Pizza. In two recent tweets about the Taco Bell menu item, she highlighted that she was a #TacoBellPartner and now an active collaborator with them.

Rumors of the menu item’s return have been floating around at least as far back as December 2021. But on Tuesday, Doja Cat went to TikTok and urged her followers to keep quiet about what she was about to tell them. She films herself laying down and with little-to-no makeup on, and over her head reads the caption, “keep this shit a secret i’m not tryna do it so ima make it terrible on purpose.”

“I gotta do this fucking TikTok where I do a—everybody keeps calling it a jingle. It’s for Taco Bell and I gotta do this jingle…,” she explained. “They want me to rap about Mexican Pizza, so I just want to give you a heads up before you see that shit. Just know, it’s contractual. Shhh. I know it’s bad. ”

“Pretty sure the jingle was your idea,” Taco Bell’s TikTok account commented.

Doja Cat debuted her Mexican Pizza rap over on Instagram Tuesday night, but a snippet of that stream was posted on TikTok, where she once again pre-empted her followers to lower their expectations.

“I made a song about Mexcian Pizza because I love it so much,” she said. “I wish that Taco Bell didn’t discontinue it a year ago and this led me to this monstrosity of a beat that I just made, and I wrote a verse and I hope you like it. And if you don’t, I understand.”

The verse includes plenty of as well as Taco Bell’s signature bell ring, and Doja Cat’s lyrics appear as a caption in the TikTok video so you can follow along. But even Doja Cat’s warnings about the song didn’t prepare people for it.

“Is this against your will,” TikToker @lemon.b0i asked, to which several people responded that, well, it was contractual.

Doja Cat’s saga to get Mexican Pizza back might not be over yet, but if it does return to menus this year (as several commenters suspect), it already has a hype song for it.