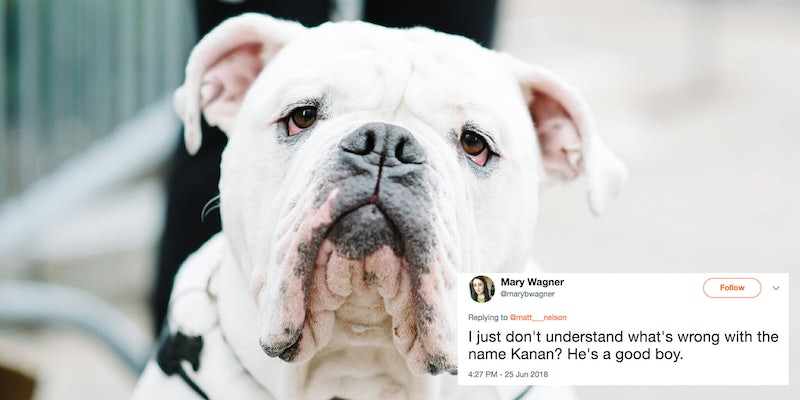 He vowed to stop changing pets' names for the account.

A popular Twitter account known for showering dogs with compliments and giving them arbitrary ratings has vowed to stop “white-washing” the names of people’s pets after being accused of the practice.

@dog_rates, which has nearly 7 million followers, posts photos of dogs and captions them with generous if impossible ratings, like “14/10 would protect at all costs.” It’s run by Matt Nelson, a dude in his early 20s, and like many popular pet accounts, he relies on photo submissions.

A Twitter user noticed on Monday that after a dog owner submitted a photo of his pet Kanan, @dog_rates posted a photo of the dog—but changed Kanan’s name to George. When the user questioned @dog_rates on the practice, the account blocked her and said “the name plays a massive role in how well the post does.”

It’s a good day to get blocked by @dog_rates for calling out when they changed a dog’s Arabic-origin name to something extremely white. pic.twitter.com/vefrTZQ2hQ

On his personal account, Nelson continued defending changing the dogs’ names. He said he always asks the pets’ owners for permission and that “there’s no rhyme or reason” to the changes. But he also said he once changed a dog’s name from Pablo, a traditionally Spanish name, to Pipsy.

He’s absolutely a good boy. And there’s definitely nothing wrong with the name. I’ve been changing them since I started the account. One of our most popular posts is of a dog named Pablo that i changed to Pipsy. There’s no rhyme or reason and I always check with the owner

As the Atlantic staff writer Taylor Lorenz noted, Nelson essentially admitted the names were often changed “to sound less ethnic” and to appeal to wider audiences.

Apparently overwhelmed by the backlash, Nelson said he would stop changing dogs’ names on the account.

I don’t even know how to apologize for this one. I always enjoyed changing names. It helped me figure out what people liked. As long as the owner approved, I thought it was fine. “White-washing” the names was obviously not my intention and it will never happen again

The incident comes on the tail of Racism Watchdog taking a break from Twitter last week. The owners of the account, who point out racist posts on Twitter by tweeting “WOOF WOOF,” were accused of promoting the fallacy of reverse racism.

In May 2017, Nelson apologized after @dog_rates came under fire for trying to sell “covfefe” hats.

Luckily, it seems this time Nelson quickly learned his lesson and can go back to rating good doggos—now with their proper names.