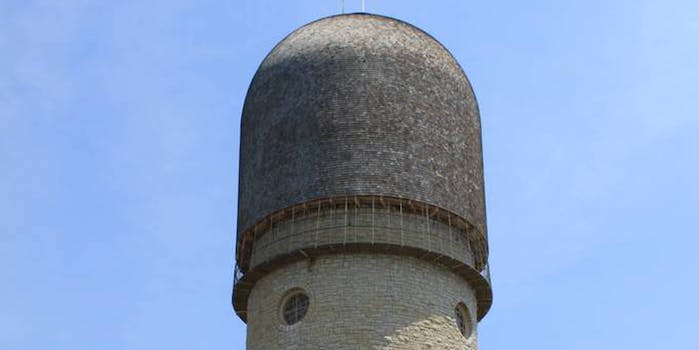 He has South Pole aspirations.

It is an undisputed fact that dicks are everywhere. Look around you. Every building, every monument, every pillar: a dick. Wouldn’t it be great for society if we had a prophet who shared this dickbundance from around the world, an auteur of architectural dick pics?

Look no further, my dick-thirsty readers, for he and I have swiped right on each other in order to fulfill our destinies and secure his dick-pic legacy for years to come.

Did I swipe right only because all of Nic’s Tinder photos featured him posing as if an erect structure of cultural importance were his penis? Maybe. I’ve been swiping a great many years. Shit gets stale.

After taking a cliché dick pic with the Washington Monument, friends on Facebook encouraged him to take more photos of buildings as his dick.

And from here, the joke took on a creative life of its own. For a while, he stuck to dick pics with major monuments. He then slowly started transforming his medium to include erect structures that, while not buildings per se, still exuded a stiffly penile essence.

As you might expect from a dick pic expert, Nic takes his cultural responsibility seriously.

“Look, I’m an artist, OK. People keep wanting me to take pictures with like a stupid lamppost or something and I’m like no man, I’m not gonna dilute my art form for your amusement,” Nic told the Daily Dot. He insists on only posing with “major important structures of cultural significance.”

A little over a year ago, Nic created a dedicated Instagram account for all of his wordly dickventures. He now travels for the sole purpose of taking building dick pics. Relying on couch-surfer friends and cheap flights, Nic explained that these trips are far from extravagant.

As a teacher living in Brooklyn, he has to plan ahead and can’t be on the road constantly. Next year, he plans on visiting South America for the first time, where, among other things, he plans to dick it up with Christ the Redeemer. Eventually, after he’s visited the six major continents (he also hasn’t yet been to Asia), he plans to start a Kickstarter for friends and fans to help get him to Antarctica to visit the South Pole, where a ceremonial pole is planted.

“I will never stop… until I die I will keep doing this,” Nic said. “Or for as long as penises continue to amuse me, and I don’t ever see that changing. Am I going to mature suddenly overnight? No, I’m wearing a shirt with pineapples on it right now. And I teach rock band to children for a living.”