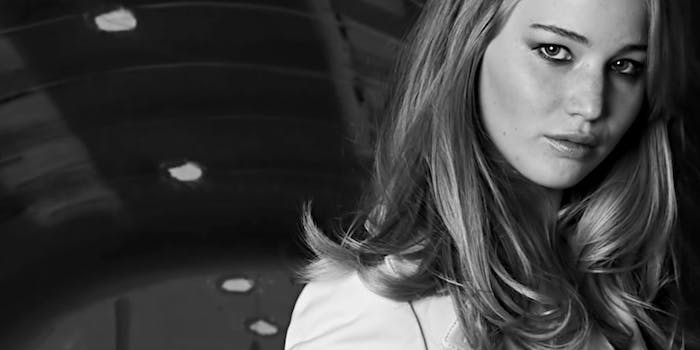 This is the Internet’s equivalent of claiming that a woman is “asking for it,” rather than seeking to punish those who are breaking the law. Instead of wondering what these women could have done to prevent their own harassment, Forbes’ Scott Mendelson wants us to look at this moment not as a scandal but a “sex crime.”

You may argue, without any intended malice, that it may be unwise in this day-and-age to put nude pictures of yourself on a cell phone which can be hacked and/or stolen. But without discounting that statement, the issue is that these women have the absolute right and privilege to put whatever they want on their cell phones with the expectation that said contents will remain private or exclusive to whomever is permitted to see them just like their male peers. The burden of moral guilt is on the people who stole said property and on those who chose to consume said stolen property for titillation and/or gratification.

However, the Internet’s dark shadow over women extends far beyond the cloud, as nearly every woman I know has in her back pocket stories of harassment or violence, so much so that it’s become its own drinking gamr. One friend had to stop writing about gaming culture because of vehement trolling she received from men who didn’t like her taking up their space, while another had to stand by while a transphobic parody account mocked her. Lindy West’s activism against using rape jokes in comedy got her constant rape threats, and if you’re Suey Park, your criticisms of Cancel Colbert make you into a national trending topic of racist invective.

But for Zelda Williams, you don’t even need to do anything except have a loved one pass away to become a victim of misogynistic backlash. After her father, beloved comedian Robin Williams, committed suicide, Williams deactivated her Twitter account, after receiving an onslaught of abusive messages about her late father.

Following Zelda Williams’ departure from the Internet, many argued that the problem was Twitter wasn’t doing enough to respond to abuse reports from its users. In an article for the Daily Dot, S.E. Smith outlines just how hard the social media service has dropped the ball on harassment:

According to Smith, the platform actually suggests that those experiencing cyberbullying “turn to family and friends for support and advice.” Smith retorts, “Because when someone’s sending me my home address and calling me a ‘fat cunt’ who deserves to be raped through the hole he’ll slit in my throat, I definitely want to ask my friends for advice.”

This is why many famous female celebrities—like Tina Fey, Jennifer Aniston, and Angelina Jolie—have chosen to stay off Twitter and live their lives separately from the double-edged sword of social media, but is it possible to stay off the Internet entirely? For anyone who even casually follows this issue, news of the celebrity photo leaks is an issue of “same shit, different day,” considering how often this happens to women on the Internet. Websites like Is Anyone Up made their name by posting revenge porn targeting women, whereas Perez Hilton raked in a fortune by housing abusive NSFW images of female celebrities without their consent.

My Daily Dot colleague, Samantha Allen, wrote a piece where she argued that it’s only getting worse for women on the Internet, as the Web becomes continues to make money off of exploiting them:

[T]he Internet has also made it much easier for men to manipulate, harass, abuse, stalk, and, yes, physically harm women… Between 4Chan, Men’s Rights Activist groups, the Reddit Red Pill community, pick-up artist (PUA) groups, and anti-PUA groups like the one that Elliot Rodger clung to so dearly, the Internet has allowed men to band together more efficiently than ever before to threaten and antagonize women.

I remember where I was when I got my first death threat on the Internet. I was sitting at my computer with a cup of coffee, browsing my email the morning after I wrote a piece about James Franco that gave trolls a helping hand right in the title: “It’s time to assassinate James Franco’s career.” When I saw a message suggesting someone should assassinate me instead, I knew that this was something of an inevitability. I laughed, shrugged it off, and went about my day no differently than if someone pointed out that I’d had a violent case of broccoli in my teeth.

But there’s a reason that a casual death sentence was an easy pill for me to swallow: It’s because I’m a man, and for me, the cost of public engagement is rarely personal. I’m not visible in the same way that women are—whether they write a strongly worded op-ed, sound off on a comment board, play a video game, or even walk down the street. I’ve never known what it’s like to feel like everything you do is being watched, as if an invisible man is following you and breathing down your neck, just waiting for you to turn down the wrong corner.

I’ve had commenters call into question my status as a sexual assault survivor (never a fun experience for anyone) but never threaten to rape me, cut off my head, or kill me the way commenters have come after Amanda Hess. I’ve never had my phone hacked just for daring to be female while being famous, like Scarlett Johansson. I’ve never had to move from my own house because I was so worried about my own safety, like Anita Sarkeesian. Unlike Sarkeesian, when I speak out about sexism in entertainment culture, I’m not targeted by trolls—I’m thanked.

In 2012, I wrote about the Kristen Stewart cheating scandal for the Huffington Post nearly a month after news of the controversy broke. Stewart was being roundly slut-shamed by tabloid media and the Internet—with the obvious “trampire” moniker going so viral that online T-shirt retailers were using the term to profit off the scandal. As an under-rock-dweller, I was a late-comer to the news, and female colleagues of mine, like Trish Bendix of AfterEllen, had long since written about it.

My post not only went viral, but readers were roundly supportive in a way they aren’t when women themselves write on the exact same subjects. I’ve written before about the reader confusion that comes from writing with a gender-neutral name, but I wrote explicitly from the perspective of a male feminist questioning the messages the media is sending women. That essay set out to achieve the exact same goals as Sarkeesian’s work, but outside of general comment section hoopla, I didn’t get a single negative response—not one. In fact, Twitter said so many nice things that I had to hide from the Internet for a while, simply because I found all the positivity so overwhelming. I doubt Anita Sarkeesian can say the same.

The closest I’ve ever come to receiving a threat of violence on the level that Sarkeesian and other female cultural critics deal with was spurred by a Huffington Post piece I wrote after Chris Brown was invited to perform at the Grammys. This was before the rapper-singer’s reconciliation with Rihanna, whom he publicly abused, and his ex still had a restraining order out on him, one that had to be violated in order to allow Brown to perform. In addition, Brown received a Grammy that night, as if the music industry were officially endorsing domestic violence. What kind of message does that send to abuse survivors?

That essay came from a personal place, as my mother is a domestic violence survivor and has been open with me about her struggles from an early age. She made me into an ally. In response to sharing her story, I expected that the Internet might come after me, as speaking out about violence against women often triggers more rhetorical violence. I was wrong. The comments section came after my mother instead. The thread has been since disabled, but if memory serves, the trolling fell into two camps: 1) My mother deserved to get beaten and 2) She should get beaten again.

My mother is in good company among the legions of women who get trolled on the Internet every day, whether or not they’re even online. The real issue is not the Internet is misogynistic but that the Web continues to act as a vehicle for unchecked sexism in society at large, a free market for our darkest impulses and a space that privileges some voices at the continued expense of others. Women will continue to speak out about the marginalization and violence they experience until they’re blue in the face, but as long as others continue to be isolated from the issue, nothing will change. If you’re not the one being affected, it’s too easy to just shrug off or blame on whatever equivalent of a short skirt you can find.

What will it take for it to get better for women on the Internet? If history is a depressing indication, it’ll take men finally paying attention, as if women haven’t already been doing so every single day.