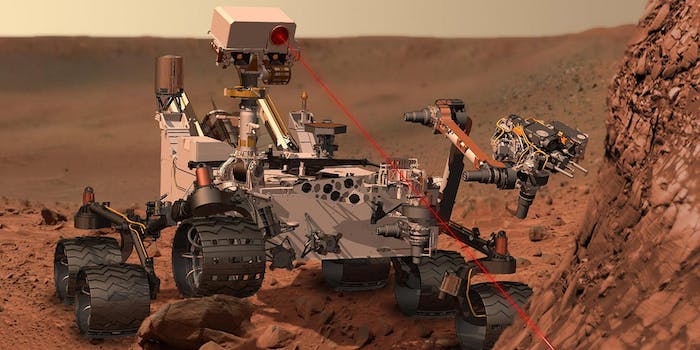 If we want to fight for the future of our own planet, it's time to finally leave it.

“Space, the final frontier.” These are the words that famously opened up the original Star Trek of the 1960s. Yet since the decade came and went, America has drastically reconsidered whether it wants to approach that final frontier after all.

With the end of the Apollo moon landings in 1972, the U.S. looked more poised than ever to continue its journey into the stars. However, if anything, the opposite has instead come true. Despite living in an era of advanced digital technology, backlash against NASA has actually increased in the past few years. Nowhere was this ambivalence toward space exploration more evident than in recent weeks, wherein the possibility of a human-led trip to Mars was met with overwhelming skepticism on the Internet.

Without question, Mars is a complicated issue. We’ve all marveled in amazement from time to time at the findings of the Mars Opportunity rover. But sending an actual person there? That’s a different matter entirely. As Vox’s Joseph Stromberg recalls, “deep-space exploration got a jump-start in 2004, when George W. Bush announced the Constellation program, a plan to return astronauts to the Moon’s surface by 2020, and to Mars sometime afterward. … The program, however, was consistently underfunded, putting it way behind schedule, and Obama killed it in 2010.”

Bush’s plan to put a man on Mars was always the subject of some derision, so it’s not surprising that Obama shut it down. However, Obama did oversee the birth of NASA’s Asteroid Redirect Mission, or ARM, which is effectively a new plan to get astronauts to Mars. The problem? No one in Congress can agree on how to get ARM off the ground, and even if they did, no one is sure on how to pay for it.

“Even if the Asteroid Redirect Mission proceeds (or if an alternate stepping-stone mission does instead), there’s another fundamental problem with NASA’s plans to get to Mars: money,” writes Stromberg. “In reality, the true cost will likely be far higher—especially since NASA’s timeline for the initial, uncrewed SLS test is already slipping, causing costs to rise.”

Then there’s the Mars One mission, a privately funded program out of the Netherlands that aims at setting up a permanent colony on the red planet by 2025. With the revelation from earlier this month that the 100 finalists for the mission have now been chosen, everyone ehas been weighing in on Mars One’s feasibility—and for the most part, they have not been too hopeful.

“Space News reports that the project’s leaders haven’t followed up on concept studies for robotic missions aimed at sending a lander and an orbiter to Mars in 2018,” notes Alan Boyle at NBC News. “The Daily Mail says Mars One’s deal with Endemol’s global TV production team has fizzled out. Meanwhile, the Guardian quotes one of Mars One’s initial supporters, astronomer Gerard Hooft, as saying the mission ‘will take quite a bit longer and be quite a bit more expensive’ than advertised.”

But somehow, even after all that, Mars still captivates. It may not be easy, and we may not get their quick, yet the mission remains important.

Maybe part of making Mars more attainable lies in focusing on small steps, rather than giant leaps. NASA’s intention to send astronauts to Mars through the ARM program by the early 2030s feels incredibly ambitious, and the fact that part of that program involves throwing a near-Earth asteroid into orbit around the moon, so they can astronauts there to explore it, makes it all feel a lot like science fiction. Keep in mind this is not the movie Armageddon; this is NASA we’re talking about here.

However, none of that feels quite so ambitious as Mars One’s plan to put a whole colony of people on Mars by the year 2025, especially since it now appears they are unlikely to even accomplish the goals they set out to complete by 2018.

But there are other programs in the works right now that would get us one step closer to Mars. As Wired’s Adam Mann has pointed out, the Inspiration Mars Foundation also has plans to get to Mars by 2018, though their approach is quite different. Funded by millionaire Dennis Tito, the foundation intends to send humans on a trip to Mars, without actually having to worry about putting them on the planet; participants would be about the same distance away from Mars as there is between Earth and the International Space Station.

“Inspiration Mars isn’t looking to sell a product in an unknown market, like the asteroid-mining Planetary Resources or the national-moon-ferrying Golden Spike Company, and doesn’t have incredibly aspirational aims, like the planet-colonizing Mars One,” writes Mann. “It hopes to undertake a straightforward mission that could spur innovation, inspire young scientists and engineers, and move human spaceflight forward.”

This element of inspiration is what really makes going to Mars worthwhile. In a way, NASA is bigger than space. The amount of technologies that have been spun-off from their missions, including advances in artificial limbs and highway safety, alone validates their entire existence. But NASA needs something to work towards if it’s going to continue to continue to be the powerhouse of ideas that it’s been for years. With the drive to get to Mars, NASA has the potential to reach new heights, but if we let them remain stagnant, the innovation ceases.

“The exploration of other worlds is a cumulative art, and with a steady cadence of missions comes an institutional knowledge for scientists and engineers,” asserts David W. Brown, also writing for Vox. “Every setback is its own library of insights. In 1964, when probe Mariner 3 missed Mars, its target, due to equipment failure, Mariner 4 was three weeks behind, and succeeded where its twin had failed.”

In the years since Mariner 4, NASA’s quest to discover the mysteries of Mars have only made their technological achievements more nuanced and complex. That’s because with Mars as the goal, NASA has had a reason to push itself.

“Planetary science is presently bolstered by its maturation over time as a field of study, and by its demonstrable successes,” continues Brown. “While NASA’s human exploration program retools for the exploration of Mars (or the moon, or an asteroid, depending on the whims of whomever is elected president), the robotic program is garnering impressive headlines. The landing of Curiosity on Mars, for example, must surely rank as an engineering wonder of not one but two worlds. New Horizons’s flyby of Pluto is likely to be one of the biggest stories of 2015, and part of science textbooks forever.”

Bringing up science textbooks may sound like a pretty cheesy way to push for scientific innovation. But make no mistake: Legacy is a big part of why America went into space in the first place, and New Horizons, NASA’s Pluto mission, is the next step in ensuring that legacy. However, Mars is the next step after that, and if we lose interest in getting there, we’ll have forever damaged our place in history as the world leaders in space exploration (something that, unlike our incarceration or gun violence rates, is actually worth ranking first in). A key part of the American spirit is our drive for achievement, and where would that spirit be today if JFK had simply chosen to let the Soviets get to the moon first?

While we must address the problems we have here on Earth before we gaze up at the stars, that doesn’t mean we shouldn’t still take some time to look every once in awhile. In 2012, Robert Zubrin—astronautical engineer, president of the Mars Society and author of The Case for Mars: The Plan to Settle the Red Planet and Why We Must—wrote for CNN on why the Mars mission is so key to American innovation. Zubrin said:

Nations, like people, thrive on challenge and decay without it. The space program itself needs challenge. … A humans-to-Mars program would…be an adventure challenge to every child in the country. … In its day, the Apollo program caused a doubling of the number of American science and engineering graduates. … There will be more than 100 million kids in our nation’s schools over the next 10 years. If a Mars program were to inspire just an extra 1 percent of them to scientific educations, the net result would be 1 million more scientists, engineers, inventors, medical researchers and doctors, making innovations that create new industries, finding new medical cures, strengthening national defense and increasing national income for decades to an extent that utterly dwarfs the expenditures of the Mars program.

Zubrin is clearly an idealist when it comes to Mars, and his belief that we need to send humans to the planet as soon as possible at times verges on alarmist. However, as he reminds us, the challenge isn’t in choosing between Mars and Earth; it’s in finding a way to invest in both. Will this be difficult and time consuming? Absolutely. It could take several decades and several billion dollars to get us to Mars, but if we don’t start planning for it now, then we’ll never get there.

Although there are many reasons not to go to Mars, including the massive expense and the potential danger to astronauts, there’s one reason we absolutely must: Going to Mars would improve our lives here on Earth. If we want to fight for the future of our own planet, it’s time to finally leave it.