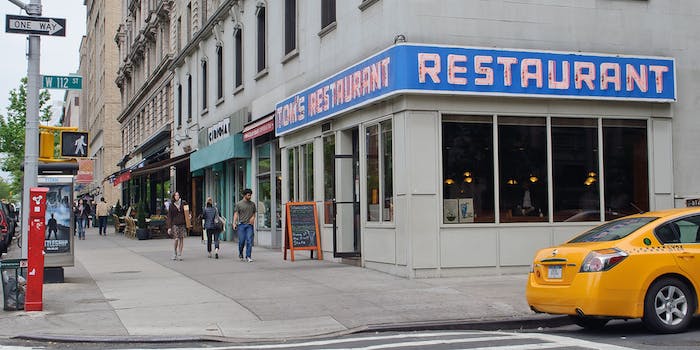 Debunking the biggest myth about ‘Seinfeld’ that everyone believes

What's Seinfeld even about, anyway?

When I told a friend that I was writing about whether Seinfeld is a “show about nothing,” I asked him what he thought the show’s real theme was. “If you had to explain to someone what Seinfeld was getting at, what would you say?” At first, he stammered, “People…very bad people doing bad things.” After giving up entirely, he then admitted, “Honestly, I’d never really thought about it.”

Seinfeld’s nothingness myth has been so widely disseminated that its become its own form of unquestionable dogma, dominating the way we remember the show’s legacy. As rumors swirl that the show might be headed to Netflix—following the high-profile launch of Simpsons World online, a program that allows users to watch every single episode of the long-running FOX program—the myth yet again returned to prominence. It’s appeared in just about every article written about the show, and if you type in “Seinfeld” and “nothing” in Google, it brings up 3.3 million hits.

One could be forgiven for the misapprehension—as Seinfeld’s entire fourth season is a meta-commentary on the idea—but it’s simply not true. In a Reddit AMA earlier this year, Jerry Seinfeld clarified that he and co-creator Larry David pitched the idea to NBC as a “a show about how a comedian gets his material,” and according to Seinfeld, he and David were initially surprised that the “show about nothing” tag took over the discourse the way it did. In fact, it would be more apt to say that it’s a show about everything.

From its earliest incarnation, when it was a fledgling NBC hopeful called The Seinfeld Chronicles, the show was rooted in its titular comedian’s own stand-up routine, before it became driven by the ensemble cast. In the original pilot—aired on July 5, 1989—Kramer’s name was “Kessler” and Elaine didn’t exist yet; the existing characters only had vague relationships to the comic lead, whose authorial voice dominated the show’s early episodes.

Although the stand-up bits would be weeded out as the show progressed and Seinfeld simply didn’t need them anymore, Jerry Seinfeld’s own observational humor was crucial in setting the tone for the show. As the later Twitter parody account “Modern Seinfeld” would point out, each episode was deeply rooted in the minutiae of everyday life. Seinfeld is not necessarily about what happens to the characters so much as how they process what happens to them and comment upon it.

The Toronto Star’s Tony Wong would later describe the show’s plots as “unimaginably thin…whether it was about finding a car in a garage, getting a seat at a Chinese restaurant or trying to figure out whether his girlfriend’s breasts were real,” but that description hides how incredibly intricate Seinfeld‘s story structure was, a graceful ballet of interwoven narratives. As Vox’s Todd Van DerWerff explains,

Prior to Seinfeld, most sitcoms broke down into an A-story and a B-story, and the supporting story could take the form of a so-called ‘runner,’ jokes that continued throughout the episode and told a very loose story but didn’t do much more than that. Particularly in its best episodes, Seinfeld blew all of that up. Even in an episode like the famous ‘The Contest’ (the one with the competition to see which of the central foursome can go the longest without masturbating), each of the four characters is handed their own storyline, all four of which tie together in the final moments to create a whole larger than its parts.

The show was famous for its “no learning, no hugging” rule, and what was then so unique about the show is how often the aforementioned final moments resist true narrative resolution, the nice bow on the action that Friends or Everybody Loves Raymond might provide. In each of the two, the show’s central conflicts will be resolved and amends made; Raymond might fight with his mother, but at the end of the show, they have to come to a mutual understanding in order to keep up the pretense of family.

In many episodes of Seinfeld, the situations don’t resolve; they get increasingly worse until they just can’t anymore—and the show has to end. During “The Junior Mint,” Jerry can’t remember his girlfriend’s name, except that it rhymes a with a “female body part.” In true Seinfeld fashion, he avoids the conflict until she confesses she’s falling in love with him, sweetly repeating his name. He can’t reciprocate, which causes him to be exposed. Rather than giving up the ruse, Jerry guesses that her name is: “Mulva?” After she storms out, he finally remembers her name, calling after her, “Dolores!”

The most infamous case of non-resolution in the show’s history is when Seinfeld killed off one of its major characters, George’s fiancee, Susan. While licking the envelopes to invite their friends and family to the impending nuptials, Susan dies of glue poisoning. Rather than mourning the death of his soon-to-be wife, George calls up the actress Marisa Tomei (playing herself) for a date. She hangs up in his face. In proceeding episodes, Susan will be all but forgotten about, a bit of minutiae as trivial as momentarily getting lost looking for one’s car, as in “The Parking Garage.”

In reference to the parking garage episode, Wong compares Seinfeld to Waiting for Godot, Samuel Beckett’s landmark absurdist play. Seinfeld isn’t the first television show to recall a night at theatre; each episode of Norman Lear’s groundbreaking All in the Family unfolded like a one-act stage production, and 1950’s teleplays like Marty brought the world of Broadway into middle America’s living rooms, heralding an early golden age of TV.

But as the show’s anti-lessons ethos suggests, Seinfeld is less a vehicle for Beckettian tragicomic existentialism than a weekly anti-morality play. Many scholars and critics have noted the show’s “conscious indifference to morals,” suggesting that the show has an amoral character; however, Seinfeld is deeply rooted in a sense of ethics, as viewed upside down. A moral funhouse mirror, Seinfeld purposefully and violently transgresses against the common mores and social codes of daily life as an act of comic rebellion.

Like Hal Hartley’s Trust, which premiered at the Toronto Film Festival just a year after Seinfeld’s debut, the show deconstructs our expectations of how the story is supposed to be told. In Trust, the humor comes from watching the pretty girl find love when she dons glasses and “uglies herself up” or seeing a pregnant girl kicked out of her home when she tells her family about the unborn baby. In another famous scene, a mother casually leaves her infant outside while she goes to the grocery store.

These are dark situations not generally mined for laughter, and Seinfeld’s humor was similarly black as night—about knowing the right thing to do and doing the exact opposite; in fact, Vulture’s Matt Zoller Seitz notes that the show often “went out of its way to provoke, baffle, and offend.”

Most shows live and die on the likability of their characters, but Seinfeld’s comic quartet was defined by their flaws; without George’s hapless narcissism or Kramer’s oafish aloofness, there would be no conflict. In having their characters break bad every episode, whether dropping a Junior mint into someone’s stomach during surgery or breaking up with someone over phone message etiquette, Seitz believes that Seinfeld was an important forerunner to TV’s modern anti-heroes, like Walter White and Don Draper.

Before Seinfeld, there were never any sitcoms that let their characters be purely selfish, treating the rest of humankind as a resource or obstacle while standing back and observing their shenanigans with a jaundiced detachment… [Seinfeld] has encouraged the writers of sitcoms and dramas alike to be true to whatever their vision may be, and not trouble themselves too much with whether you approve of what the characters say and do. Would Tony Soprano have strangled that snitch in the woods, would Six Feet Under’s Nate Fisher have been a sonofabitch right up to his final moments on Earth, would 30 Rock’s Jenna have treated the entire known universe as a ladder leading to her own career success, if Seinfeld hadn’t steamrolled an artistic path for them back in the early ’90s?

What’s made the anti-hero such a popular alternative to traditional televisual narratives are the ways in which characters like Tony Soprano act as an outlet for the audience’s desires. There’s an element of catharsis and wish fulfillment in watching Tony whack his enemies, seeking to become the master of his domain in the same way that Seinfeld’s neurotic New Yorkers were. For the audience, the act of watching George Costanza (or his later Curb Your Enthusiasm counterpart, Larry David) commit acts of comic atrocity wasn’t just a form of entertainment. It was liberation.

In You’ve Got Mail, Meg Ryan famously inquired as to why The Godfather was so lionized among men. Tom Hanks’ character responded that what makes the film great it answers all of life’s questions. For instance, should you be asking yourself what to pack on summer vacation, The Godfather is here to help: “Leave the gun, take the cannoli.” He continues, “What day of the week is it?…‘Monday, Tuesday, Thursday, Wednesday.’”

Similarly, the genius of Seinfeld isn’t just that it transgresses social norms, but that it’s firmly rooted in the common experience of the everyday. No matter the situation, there’s a Seinfeld reference for it; however, what separates Seinfeld from Hanks’ theory on The Godfather is that it’s not the “sum of all wisdom,” just the sum of all life. Seinfeld is about something as simple as thinking to yourself that someone should make a bakery that just sells the top of the muffin, because no one eats the bottom. Just what is the deal with muffin bottoms, anyway?

Jerry Seinfeld might have set out to make a sitcom showcasing his own worldview as a stand-up comedian, but over the course of nine seasons, Seinfeld ceased to be about him, despite continuing to bear his name. It was about us, whether we stopped to consider it or not.

Photo via InSapphoWeTrust/Flickr (CC BY S.A.-2.0)