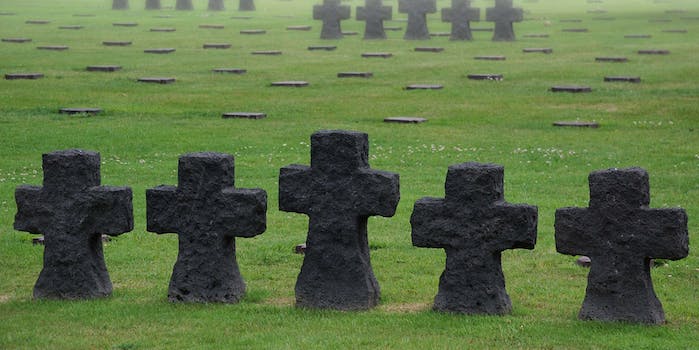 Should you be able to predict your own death?

If you could open a door to find out when you were going to die, would you? A more important question might be whether you should—especially since the technologies behind our understanding of death and dying are growing more sophisticated every year, so it’s not just hypothetical any more. Forget goofy Internet quizzes: Researchers in Australia and the U.K. have uncovered a “DNA clock” they say can indicate an increased risk of premature death. Meanwhile, unrelated research is being used to determine whether aging and critically ill patients are likely to die in the next 30 days.

It turns out that when it comes to predicting your death, there is an app for that—or at least there will be, because researchers are developing the capacity to provide highly accurate estimates on the basis of patient profiles. That’s potentially loaded information to have in a world where bioethics is changing so rapidly, we’re having trouble keeping up. Death is the only certain thing in our lives other than taxes, and maybe it’s not such a good idea to know when it’s coming for us—certainly being forewarned about tax day doesn’t make us breathe any easier.

Self-awareness is our blessing and our curse, as it breeds a deep fear of our own demise. Many people have an acute memory of when they first learned about death and the concept that life was finite, through the death of a beloved pet, family member, or friend. As we move through life, our own deaths become less abstract and more real—and also more terrifying. Death is the great unknown, even for those who have their religious faith and beliefs about the afterlife to comfort them. For those who have sat with dead and dying people, the ravages to the body that accompany death are often disturbing and upsetting to witness, making our terror even more deep-seated.

Modern society distances itself from death, putting bodies into the hands of funeral directors and holding sterile funerals and memorials, for the most part. Few communities in the West care for their own dead, conduct natural burials, or interact closely with the dead and dying—in their final days, people may receive little comfort unless they have access to a good regional hospice program. Medicine is obsessed with curing disease, not with confronting death and dying, and even for those who are clearly terminally ill, the drive is to cure the patient, rather than to provide comfort.

Death feels terrifying and unpredictable, and humans invest a great deal in attempting to control it. It’s not just the commonsense safety measures we develop and deploy—the airbags in our cars, the helmets we recommend for cyclists, and the reinforced buildings we build to resist earthquakes. It’s also found in medicine, where life extension and keeping patients alive for as long as possible is often a key goal for providers.

A friend who recently died of cancer told me on one of my visits to his deathbed that the chemo had been worse than the dying. It was, he said, ultimately why he opted to stop treatment, return home to be with his family, pursue comfort care, and focus on a good death. Fearing the thought of spending his last days violently ill in a hospital, he opted to resolve lingering conflicts and fears and face his death head-on, rather than running from it.

The idea of a “good death” has become increasingly difficult to define—one reason the Order of the Good Death, an organization founded by people who work with the many faces of death, is challenging the way people think about death and dying. Through “death salons,” where members come together to talk about death, dying, and related subjects, the group cultivates an active conversation about a very taboo topic.

One of the organization’s co-founders, Caitlin Doughty, writes of life and death, “[T]he vast majority of your life isn’t spent in mourning. It’s spent living. And while you’re living, it will not hurt you to have a fun, positive relationship with Death. Death is fascinating. Chaotic and ordered at the same time.”

Leaving death as an unknown—while taking reasonable precautions to prevent death, like vaccinating against preventable diseases and inspecting aircraft for safety—allows us to focus more on our lives and less on what might happen in death. The concept of a “death clock,” as it were, in this instance only provides us with the depressing news that DNA methylation, a process that happens over time to all of us, may happen at an accelerated rate in some people, leading to an earlier death.

This research does indicate that external factors—like diet, exercise, disease, and stress—may play a key role in when we die, but this doesn’t provide any terribly new information. We already know that people in poor health tend to die earlier, and we don’t need a computer model to tell us that—and we also know that healthy, fit, powerful 80-year-old athletes can be killed in car crashes. Death is unexpected, an entity that can pop up from around any corner.

Prediction tools like Wharton’s life expectancy calculator provide interesting insights into how long we’re going to live based on concrete data from our lives. Some risk factors are unavoidable; if you have a first-degree relative who died of heart disease or certain cancers, that elevates your risks no matter how diligent you are about your health. Other factors are within your control, and using such tools can allow you to see how making small life changes can sometimes make a big difference.

But ultimately, all of these resources are just predictions, and they don’t help us master the real fears and worries that surround death. If anything, they exacerbate them, by pretending that death is something that can be controlled and regulated, when it’s a wild, unpredictable visitor. Engaging with death honestly and preparing for it by living our lives to the fullest is a more productive use of our time than panicking over a statistical analysis that suggests we may or may not die earlier than expected.

On the other hand, CriSTAL, the experimental protocol used to determine the risk that a patient will die in the next 30 days, is a powerful tool. Rather than scaremongering and building up fears around death, it opens up an opportunity for an important conversation—one that should have happened long ago, but doesn’t in a culture that fears death. A 30 day warning allows patients to spend time with friends and family, to set their affairs in order, to focus on, as they say, living every day as though it might be their last.

It also serves a valuable bioethical role, by helping patients make important decisions about their care. If a patient’s illness has progressed to the point that death is extremely likely, she may opt to forgo expensive, invasive, unpleasant treatments that require hospitalization. She might want to return home to avoid being among the 70 percent of Americans who die in hospital and institutional settings. For those who are dying, quality of life is paramount—because quantity is in very short supply.

Technology that encourages us to focus on when we are going to die, rather than how we should live, is inherently dangerous. It encourages us to ask the wrong questions of ourselves and the people around us; much better tools might be apps that provide people with prompts so they can have conversations about death and dying with friends and family who might be uncomfortable, or software that provides doctors with resources to provide to patients who want detailed information on their options.

And maybe technology isn’t the solution at all. For a dying person facing the last few days of her life, a friendly face and a warm hand is more important than whether a test she took twenty years ago accurately predicted the date of her death.