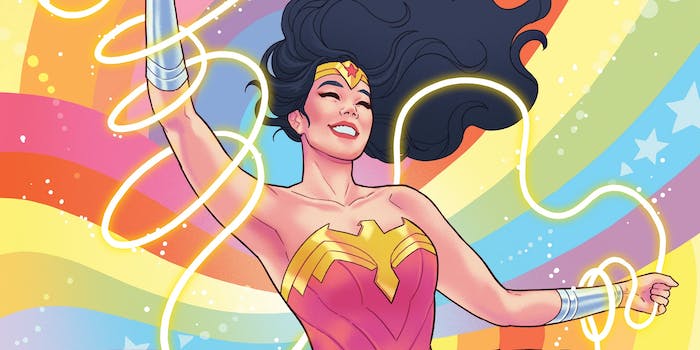 A Twitter poll turned into a referendum on queer superheroes in the DC Universe.

DC Comics‘ latest publicity stunt asks fans to choose which comics get published in the first place, but the social media campaign has also unwittingly sparked a conversation about queer representation among superheroes.

Under the hashtag #DCRoundRobin, the publisher put together a March Madness-style bracket of comic book pitches, asking fans to pick their faves. The winner of the bracket will get made into a complete series. It’s certainly grabbing people’s attention, but not always for the right reasons.

The bracket is full of well-known characters like Superman and Swamp Thing, with brief summaries for each pitch. In a series of Twitter polls, sixteen pitches will be narrowed down to one victor. These pitches don’t mention the creative teams for each comic, so fans are basically being asked to choose who DC Comics hires for a freelance project—without knowing (at least at first) who those people are.

This format quickly received backlash because it pits creators against each other in a popularity contest that can be easily gamed. But overall, #DCRoundRobin is getting plenty of engagement because people like to vote in online polls. And since all the pitches sound pretty cool, some fans are hoping this is a bait-and-switch stunt where DC will choose to publish all of the pitches instead of just one.

The real controversy is centered around one specific face-off: JLQ vs Robins. This poll has already received about 15,000 more votes than the others, and has over 1,000 retweets compared to the 50-100 on other showdowns.

Robins is a team-up between Batman’s sidekicks, a popular concept involving beloved, established characters. Meanwhile, JLQ is a story about eight unspecified queer heroes. So DC essentially set up a public poll where fans can vote for or against queer representation. It suggests the publisher really didn’t think through the implications of this face-off, because it a) asks fans to choose between unknown queer characters and a popular, pre-existing brand, and b) inevitably attracted attention from homophobes. This poll is now effectively a referendum on the existence of queer superheroes.

Given the amount of attention paid to this poll, it wouldn’t be surprising to see DC publish both comics, even if JLQ loses in the first round. But the poll itself illustrates why this kind of popularity contest often backfires. DC wanted to engage with its fanbase but failed to acknowledge the sociopolitical divisions within that fanbase, or the way fan campaigns can quickly turn toxic. Queer representation is a contentious issue in DC fandom and in pop culture at large, and hardly the kind of choice to leave up to an anonymous poll.