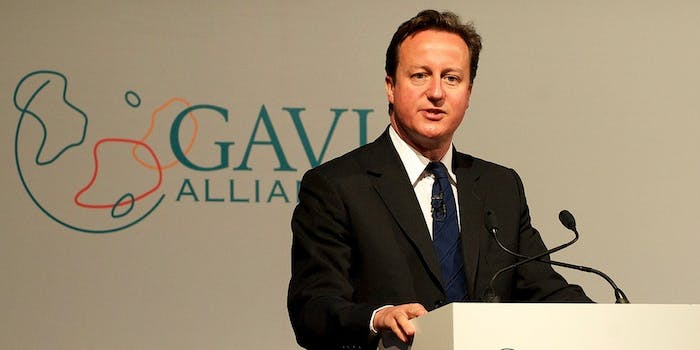 David Cameron called Obama, and the whole Internet joined in

The Internet became part of a very important phone call.

Tensions between Ukraine and Russia over the crisis in Crimea are at an all-time high, and the U.S. and U.K. are determined to work together.

To keep his followers and constituents up to date, Prime Minister David Cameron reaffirmed to his Twitter followers that he and President Barack Obama were united in condemning Russia for its actions. To prove it, he posted a photo of himself talking on the phone. The stern expression. The pose. It’s perfect.

I’ve been speaking to @BarackObama about the situation in Ukraine. We are united in condemnation of Russia’s actions. pic.twitter.com/7Rk2k8iOIK

What Cameron probably didn’t plan was for the Internet to enter the call as well. It started with comedian Rob Delaney, and other celebrities soon joined in.

.@David_Cameron @BarackObama Hi guys, I’m on the line now too. Get me up to speed. pic.twitter.com/xhmJG5KpxT

Who needs a super selfie when you’ve got these guys all on the line?

Soon enough, anyone who had a phone started tuning in.

“Hi Dave, yes I agree, everything is most definitely not awesome” #davecalls pic.twitter.com/0R9BrxLLhH

no. i will not stop. i haven’t even started. #davecalls pic.twitter.com/rJrb1LRrTf

“Welcome to Priest Chatback – if you’re under 18 or not a priest, please hang up now…” #davecalls pic.twitter.com/zMBjtyH3v0

At a certain point, it didn’t matter if you had a phone at your side or not. If you could hold it up like a phone, it was a phone.

@SirPatStew @robdelaney @David_Cameron @BarackObama I’m in but anyone else getting that muffled sound??! pic.twitter.com/ZY2dpUiXBr

You won’t believe the filth Mr. Cameron is spouting on this phone call… pic.twitter.com/aXzubsazwU

At least this way everyone got the memo.