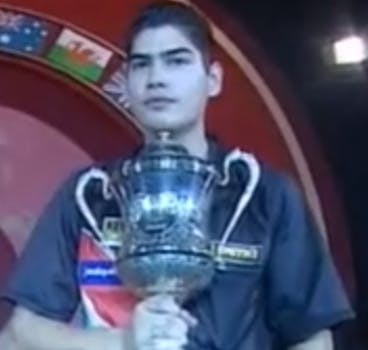 Former darts world champion Jelle Klaasen was questioned by police Tuesday after apparently sending nude photos of himself to a 15-year-old girl via Twitter and email.

According to Dutch newspaper Omroep Brabant, Klaasen conversed with the girl, who suffers mental health problems, via direct messages and sent photos of himself in states of undress. He had apparently known her family for years, and a teacher found the photos on the girl’s phone.

Klaasen, 27, made a statement Tuesday, in which he revealed he had been interrogated by police and apologized for his actions. He added that he will soon learn whether he is to be prosecuted.

The girl’s family refused to accept his apology, adding that she was upset because she thought Klaasen was angry with her. The family has filed a suit against Klaasen.

Users of various darts forums suggested that Klaasen’s career is over. Some of Klaasen’s rivals have criticized him on Twitter, including Steve West, who accused Klaasen of making moves on his wife and called him a “filthy paedo.” West’s brother, Tony, also slammed Klaasen in a tweet that’s not suitable for print.

Five-time world champion Raymond van Barneveld tweeted that he was “shocked” by the reports, while fellow pro Mark Dudbridge was reluctant to comment “until all the facts are known.”