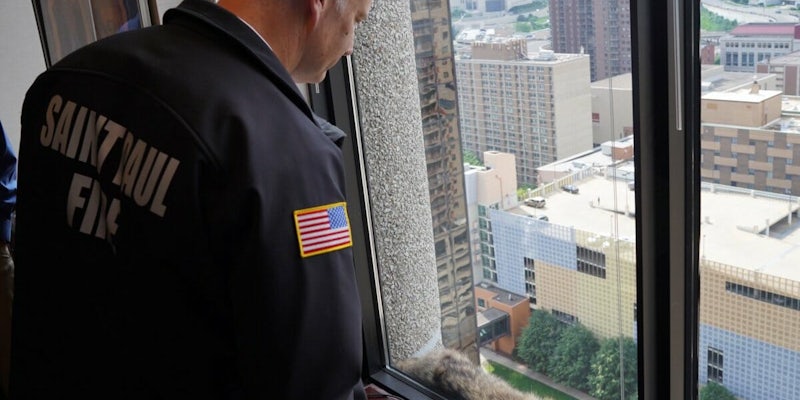 The daring Minnesota raccoon is safe, everyone

Well, the harrowing journey is over. The limber raccoon that climbed a building in St. Paul, Minnesota on Tuesday safely made it to the roof early today. The raccoon first appeared on a ledge of a building a couple of days ago. Instead of trying to find a way down, though, the animal started scaling the nearby 25-story UBS tower. Local Minnesota Public Radio reporter Tim Nelson livetweeted the whole incident and posted videos of the raccoon’s busy day.

Here’s the raccoon, dubbed by the internet as MPR Raccoon, at the beginning of the journey:

The #mprraccoon has rescued itself. Sort of. Now it's climbing the skyscraper next door. pic.twitter.com/YD8jalkrrM

And here is the animal making it to the roof, around 2:30am CT, where animal control set out a cat food trap:

Can confirm #MPRraccoon is still itchy. Got a little visit from @StPaulFireDept too! Cat food awaits it on the roof. pic.twitter.com/WeOTWmbaqz

Here it is, #MPRRaccoon’s valiant climb to the top of the UBS Center in Downtown St. Paul, this morning. @KARE11 @MPRnews pic.twitter.com/ot1DPNeRF5

THE GREATEST STORY EVER TOLD

The internet watched the raccoon’s slow ascent like it was a captivating reality TV show or a car chase. Memes and jokes followed—and they included references to other seemingly Impossible journeys:

It appears that the raccoon has been trapped.

Top floor law firm @donnelly_law says UBS building management has told them the #mprraccoon formerly in their window HAS BEEN TRAPPED.

RACCOON UPDATE: it has been trapped, its eating, still on top of tower, will be released "somewhere safe" by private Brooklyn Park contractor Wildlife Management Services