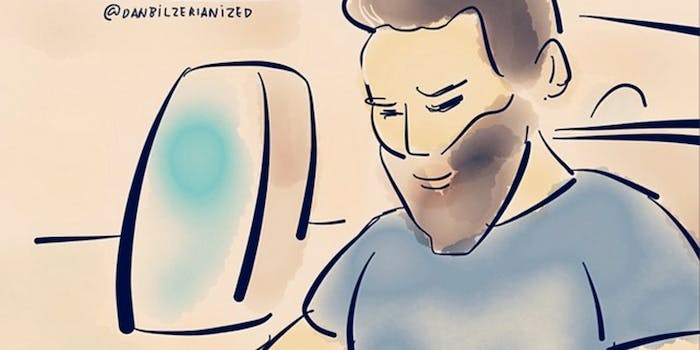 The Playboy King of Instagram is now the playboy king of the fine-art world.

Every artist has his muse. For Andy Warhol, it was Edie Sedgwick; for Lewis Carroll, it was Alice Liddell; for Gabriel Dante Rossetti, it was Elizabeth Siddal. For the artist behind @danbilzerianized, it’s the Playboy King of Instagram, Dan Bilzerian.

As you can see, @danbilzerianized is basically a serialized, comic-book-esque narrative of Bilzerian’s life, as told through watercolor renderings of his Instagram photos.

We know little about @danbilzerianized or his artistic process, other than what we can deduce from his brief description: “I am 7yo artist, inspired by King of The World Dan Bilzerian!”

(Of course, judging by the quality of his work and his excessive use of profanity, he’s probably not actually 7, though his 58,000 Instagram followers don’t seem to be disputing this). But really, that’s all we need to know, as everyone knows a great artist never reveals his process.

The other thing we know about @danbilzerianized? That he’s received the ultimate seal of approval: a repost from his muse and divine source of inspiration, the Playboy King of Instagram himself.

Expect to see “Bilzerian With Surgically Enhanced Girl On Surfboard” on the walls of the Met come 2015.