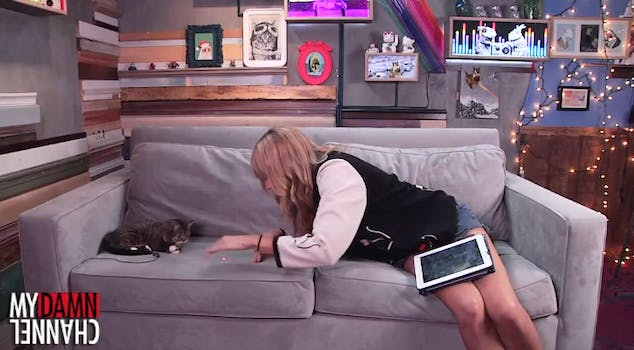 "You are truly an inspiration and definitely a cat."

Grace Helbig finally got to unleash her inner cat.

“Today I’m here with someone I see a lot of myself in,” she said before introducing her guest.

On the latest Daily Grace, she sat down for a one-on-one interview with none other than the Internet’s cutest cat,  Lil Bub, who, like most celebrities, was there to promote a book and movie.

Like fellow Internet cat celebrity Grumpy Cat, Lil Bub has feline dwarfism, but she also has a number of other genetic mutations including polydactylism and a disformed lower jaw, which causes her tongue to stick out and breathe loudly.

The Bloomington, Ind. native has been melting hearts on the Internet since November 2011 with a number of YouTube videos posted by her owner. She now has thousands of Facebook fans, followers on Tumblr and Instagram, and she’s even met A-list celebrities.

And soon, she’ll be the subject of a Vice documentary on the Internet cat phenomenon.

Helbig wasted no time in pulling out the hard-hitting questions for Lil Bub, but the cat quickly proved that the fame wasn’t going to her head. With a microphone placed near her face, she spent most of the interview breathing loudly, grooming herself, or—like most cats—sleeping.

Despite that, Helbig managed to get Lil Bub to express herself, and we learned a lot more about the famous feline in the process. Fish makes her content, Amanda Bynes is a touchy subject (complete with bug eyes), and Helbig is even more distracted by a laser than Lil Bub.

“You are truly an inspiration and definitely a cat,” Helbig said.