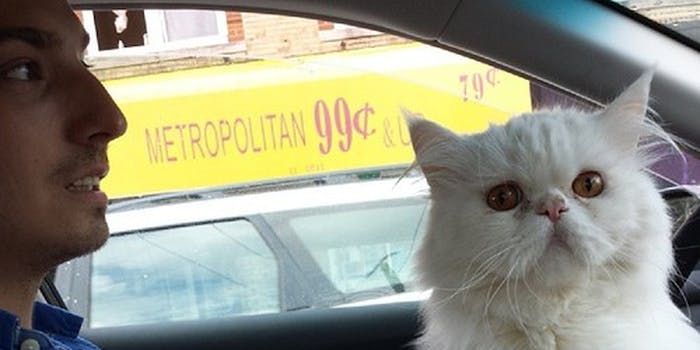 Daily Fluff: Cat insists on riding up front in taxi

"I don't think I'd like it if all my fares [insisted on riding in my lap] — that's not the kind of taxi I run," the driver said.

Sheila the cat has been living in New York City for seven years, yet it wasn’t until yesterday that she hailed her first cab.

“Mostly she just stuck to the three or four block radius around her house,” explained Meredith Tamlu, a neighbor. But when Sheila’s podiatrist moved his practice way up town, she decided that taking a taxi was preferable to finding a new doctor.

Unfortunately for the driver of the cab, Sheila insisted on riding up front … in his lap.

“It was a little weird,” said Tony Peres, the driver, “but it wasn’t so bad. I mean, I don’t think I’d like it if all my fares did that — that’s not the kind of taxi I run. But I was okay with having a kitty in my lap for a few blocks.”