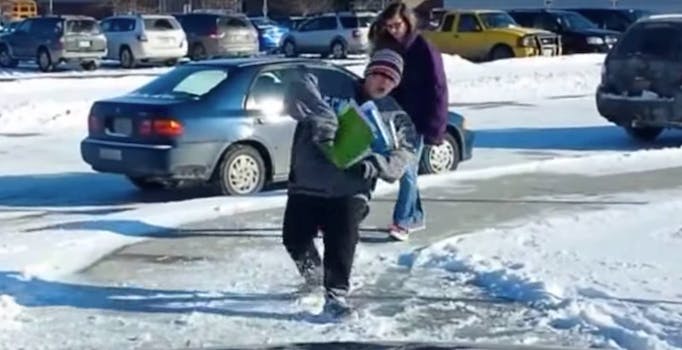 'Watch this kid. I guarantee he's going to drill it.'

Why do some terrible things feel so right?

A dad picking up his daughter from school quickly learned that he had the perfect parking spot to watch kids slip on ice patch. He knows he shouldn’t laugh—let alone film such a screwball comedy—but he just can’t help it. The kids fall like clockwork.

This dad is picking up his daughter from school and decides to film all the kids slipping on an ice path pic.twitter.com/QQyo5NmyzN

That Twitter video went viral over the weekend, netting Ray Walker over 140,000 retweets, but it’s a blatant rip of a popular video from 2014—a frustrating trend that removes valuable context and credit.

In retrospect, the original YouTube clip plays out like the DVD extended version: It’s a full six minutes long and runs for two minutes after he picks up his daughter. And sure enough, the best fall comes last.

Let’s keep telling ourselves that.