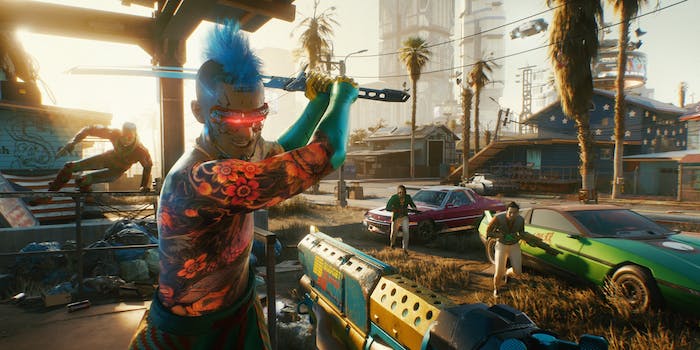 Who had 'accidentally visible penis' on their glitch bingo card?

The rollout for Cyberpunk 2077 is not going smoothly. The game’s launch this week was marred by problems ranging from transphobia to seizure-inducing visual effects. Gamers are also reporting rampant glitches, with one particular glitch grabbing a lot of attention for involving visible genitalia.

Needless to say, this post is kind of NSFW.

When you design your character in Cyberpunk 2077, you can choose their genitals along with more typical elements like clothes and hair. This idea already earned some complaints before the game came out, tying into broader criticisms of transphobic themes. As the Daily Dot’s Ana Valens explains, “While players can customize their genitals independently of their gender, Cyberpunk 2077 ties players’ pronouns to their voices, and there’s no nonbinary pronoun option.”

Basically, the game is weirdly obsessed with people’s junk. Players can choose, somewhat ridiculously, between two penis styles (which can be adjusted for size) and one vagina, along with customizing their character’s pubic hair.

This unnecessary attention to genital detail has caused an unexpected problem: Some people are noticing their avatar’s penis clipping through their clothes. Yes, Cyberpunk 2077 has turned its players into a bunch of cyber-flashers.

This glitch is widespread, and while it doesn’t seem to affect gameplay, it’s a hilarious problem for Cyberpunk 2077 to face on day one. The game already boasts adult content including sex scenes, so players probably won’t be scandalized by a few unexpected flashes of their character’s junk. However, it’s definitely embarrassing for Cyberpunk 2077‘s creators, who decided it was vitally important to include multiple penis options but failed to make sure they’d stay inside the characters’ clothes.