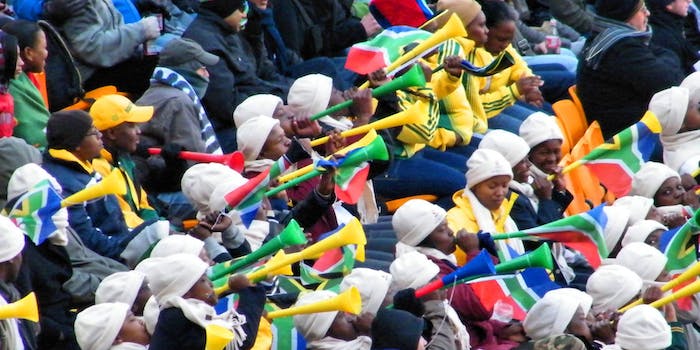 If you thought team loyalties brought out sports fan's vicious side, it's only because you hadn't heard their reactions to the vuvuzela.

In 2010, in the middle of the FIFA World Cup, the Guardian wrote an article so polarizing that it caused a three-day onslaught of fan reactions so heated that the news outlet had to shut down commenting altogether.

What on earth were soccer fans so passionate about?

It was, of course, the vuvuzela, the noisemaker that exploded to international attention when South Africans brought them to the 2010 tournament. Though the instruments were a core part of soccer culture in southern African nations and other parts of the world, they were largely reviled by international fans. The long conical horns were blamed for everything from audience hearing loss to poor player performances to germ-spreading. And, of course, they sparked debate across the Internet.

But before the Guardian killed its comment boards, one professor studied them to see what information he could glean from the opinions of Britain’s irate soccer fans. Now, Arizona State University communication professor Jeffrey Kassing is sharing what he’s learned with the world in a new book called African soccer, Identity Politics and Global Media Narratives: The Legacy of the FIFA 2010 World Cup.

Kassing has authored a chapter for the book, “Noisemaker or Cultural Symbol: The Vuvuzela Controversy and Expressions of soccer Fandom.” In the chapter, he discusses what he learned from the Guardian’s comment war over the vuvuzela in 2010—and what we can all learn as a result.

Kassing took a look at all of the negative opinions on an article the Guardian published about FIFA considering whether or not to ban the vuvuzela from stadiums during competitions. Kassing drew themes from reader responses—and unsurprisingly, they revealed a distinctly Eurocentric viewpoint.

“People felt very strongly that the vuvuzela disrupted the experience of fans and viewers because it conflicted with their expectations of how fandom should be performed,” Kassing told Phys Org. “In particular, fans felt the vuvuzela interrupted a prescribed soundscape for matches—one characterized by singing, applauding, and cheering at very specific moments.”

It’s no secret that European culture has a way of asserting itself where it doesn’t belong.

…really more jarring and out of place than, say, this?

As Kassing points out, appropriate forms of celebration vary from culture to culture. Noisemakers at soccer matches are also popular in Brazil, though the Brazilian equivalent of the vuvuzula, the caxirola, has been banned for this year’s World Cup. But fans unused to the sporting experience of other cultures might not be able to tolerate the tradition.

Kassing said the Guardian‘s commenting fans identified the vuvuzula as a “fundamental threat” to their cultural traditions, and therefore couldn’t accept the horn “as a legitimate or alternative fan tradition.” At the same time, he pointed out that dissenters from the majority, the ones who supported the right of the South African fans to celebrate in any way they wished, often exemplified cracks in the structure of English soccer fandom.

“Complain about the vuvuzelas if you want but please don’t pretend [the vuvuzelas] drown out anything more imaginative,” read one such comment.

In the end, as is often the way of a majority viewpoint, the anti-vuvuzela comments said more about the mentality of U.K. soccer than the South African fans who just wanted to have fun.