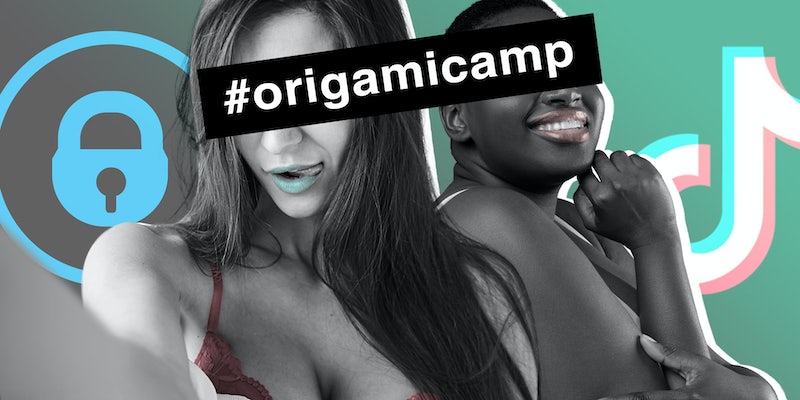 The weekend of collaboration was overshadowed by allegations of sexual misconduct levied against one of its prominent attendees.

Origami Camp was supposed to be a weekend for OnlyFans content creators to get together and create both TikTok-friendly and NSFW content in a Hype House-esque type of environment. Instead, the weekend of collaboration was overshadowed by allegations of sexual misconduct levied against one of its prominent attendees, sparking a larger discussion about the nuances of consent among sex workers.

Shortly after the weekend, one of the event’s creators, Natsha Noel, told Mashable that #OrigamiCamp was a chance for the sex workers to get to know each other and collab via TikTok “plus any other content [we] were comfortable making since all of us are sex workers” in a shared residence. According to a tweet from Hawk (@hawkhatesyou), one of the event’s organizers, the group rented an Airbnb in Washington state in September. TikTok user @lunababyy69, who also attended the weekend, told Mashable the creators chose the word “origami” as a substitute for “orgy,” a word that might’ve violated TikTok’s community guidelines.

Allie Rae, who did not attend Origami Camp but is an OnlyFans content creator, told the Daily Dot she was so impressed with the endeavor because the group was able to combine all their audiences for a collaborative, viral presence.

“They basically created a Hype House for the weekend,” Rae told the Daily Dot during a phone call.

Thanks to Gen Z’s proclivity for normalizing (and legalizing) sex work, #OrigamiCamp had a huge audience. A quick scroll through the weekend’s hashtag on TikTok shows that most of the videos went viral, receiving somewhere between 50,000 and 200,000 likes.

About six weeks after the weekend, though, allegations of sexual misconduct surfaced about one of its prominent attendees: Tyler Rusher, who goes by Auntie Tyler Thanos online. Rusher has since deactivated their TikTok and Instagram accounts but boasts over 7,000 Twitter followers and 5,000 YouTube subscribers.

Tariq (an attendee of the event who goes by Kendoll on OnlyFans and TikTok) alleged in a tweet that recieved over 750 likes that Rusher, “sexually harassed multiple people and made everyone uncomfortable,” in part by watching sexual content that was being filmed without the creator’s consent. “We asked you multiple times not to sit in the corner of the room everytime someone filmed,” Tariq said in the Oct. 29 tweet, directly addressing Rusher. Such allegations against Rusher exemplify that consent when filming sexual content is not automatic and that it’s much more than a one-time agreement.

Shortly after Tariq tweeted the allegation, Ruby (@rubytheecherry), another TikToker, OnlyFans creator, and attendee of the weekend, tweeted that Rusher “violated” her and others.

“You were watching us through the window,” Ruby tweeted. “Why would we feel comfortable filming with you when you were making us feel uncomfortable?”

Hank, another TikToker, OnlyFans creator, and attendee, said in a TikTok that attendees signed a non-disclosure agreement (NDA) in advance of the weekend. Hank, like most of the other attendees, has over 250,000 followers on TikTok.

“Everyone there legally was not supposed to bring this up online,” she said. Hank then shows a text message stipulating the NDA, saying that it was drafted by the lawyer of Hawk and that the agreement was to “protect everyone from ‘rumors or drama’ appearing on someone’s timeline.”

Rusher’s TikTok and Instagram accounts are no longer available, but the Daily Dot reviewed recordings of Rusher’s TikToks that feature their reactions to the allegations. In one, Rusher yells and pushes over items. In another, Rusher says, “How did I violate you, Ruby, when we did a scene before anybody got there? Huh?”

“How did I violate you, Tariq, when you kept asking me to take pictures of your ass? Huh?” Rusher continues.

Rusher seems to be in a much calmer mood in a third video. In it, they say that they are “not going to keep fighting and arguing an uphill battle on something that I know I did not do. Something I would never actually do.”

“I should’ve known initially in my gut when I felt unwanted to not go,” Rusher says in the video. “But hey, you live and you learn and then the internet makes you a predator.”

Rusher was not originally invited to the weekend, according to a viral TikTok by user @arianaventi93, who appears to go by Venti. Venti says that after stitching, duetting, and interacting with TikToks from creators already on the guest list for the weekend, Rusher was invited to #OrigamiCamp “with the agreement that they’re only going to be doing lighting, editing, filming.” Venti says the other creators did not agree to have Rusher included in the scenes filmed for OnlyFans.  (Rusher disputes these claims, as noted in the update below.) The Daily Dot has reached out to Venti.

“When they started filming, they had to repeatedly tell Rusher, ‘Can you leave the room? You know, you’re not supposed to be in here,’” Venti recalls hearing from attendees. Venti says Rusher repeatedly left and tried to sneak back in, and, at one point, they watched a scene be filmed from a window (as referenced by Ruby’s tweet). Rusher, Venti alleges, also tried to film scenes with some of the content creators. “And that was not agreed upon. … Boundaries were crossed,” Venti, who didn’t seem to attend the weekend, reiterates.

Tayler Morgan, one of the creators who organized the weekend, spoke out against Rusher as well.

NBC News reported that some creators did not upload content filmed during the trip “out of discomfort.”

While #OrigamiCamp remains influential in its ability to bring non-explicit content from sex workers into the mainstream, it also demonstrates the nuances of consent and collaboration in sex work.

Félix told the Daily Dot in a phone call that making agreements about what will happen in scenes or the sexual content that’s being filmed functions like a brainstorming session.

Both Rae and Félix said they create written agreements with collaborators. Félix referenced submitting 2257 Forms, which allow creators to produce and film sexually explicit content in accordance with the Child Protection and Obscenity Enforcement Act. Rae said she submits consent forms and photo identification from anyone who is in her videos to OnlyFans before posting them.

And that’s just when it comes to the people actually in the scenes. Rae stressed that when it comes to choosing people to either film with or have on set, “you really have to know who you’re working with.” “A piece of paper is not really going to save you,” she told the Daily Dot.

Of course, neither Rae nor Félix blame the #OrigamiCamp creators for including Rusher. Félix said that sexual violence can come from anyone—including queer people.

“Just because we are in an environment that deals with adult themes and sexuality and all of that does not mean that consent is automatic,” they told the Daily Dot. “It’s negotiated.”

“Everyone has their own idea of things and their own level of ethics and what they may or may not deem appropriate,” she said.

SX Noir, president of Women of Sex Tech and host of Thot Leader Podcast, told the Daily Dot she believes that contracts between sex workers—and contracts of any kind—should be much more public. In fact, she advocates for the use of “smart contracts” that exist within blockchain, or a digital register of purchases made using cryptocurrency. In her words, a decentralized, smart contract is more advantageous than a legal contract for people of color, who are often left behind in the American legal system.

“When we have a decentralized element of having contracts, what it does is it allows people like us to have a voice and to be honest and open and real,” she said in a phone interview. “Elements of justice have never fit the lens of a sex worker life.”

She also said that TikTok and sex work aren’t a great fit and explained that the app glamorizes sex work in a way that is disproportionate to how much political and legal backing sex workers have in society.

“We really, really romanticize how progressive the internet is, and it is not. It’s not progressive at all,” she told the Daily Dot. “There needs to be real acknowledgement of the real harms of sex work and to not let social media glamorize something to the point of physical violence to the point of sexual assault.”

Such glamorization of sex work can lead to violence and assault without justice, SX Noir said. Thus, she sees #OrigamiCamp as a cautionary tale.

@MelaninMavin97, a sex worker and TikToker, posted a video on the aftermath of #OrigamiCamp that echoed SX Noir’s comments. She said that Rusher’s actions have “permanently and significantly altered” how sex workers do business on social media and have discouraged her from collaborating with other sex workers in the future.

“[I] will be hesitant with initiating collaborations with certain creators for fear of looking like Auntie Tyler Thanos,” she said in a TikTok. The Daily Dot has reached out to @MelaninMaven97.

Looking at the bigger picture, SX Noir prescribes paying attention to how #OrigamiCamp unfolded, because she said it’s not the last of its kind.

“We should all just be listening to the harm that’s happened, and talking within our communities about how we can have harm reduction around it,” she said. “We’re going to see more of this. These dynamics are not going away.”

The Daily Dot has reached out to Origami Camp creators Tayler Morgan and Hawk as well as attendees Natasha Noel, Hank, and Tariq.

Update 8:45 am CT, Dec. 12: In a phone interview with the Daily Dot on Tuesday, Dec. 7, Rusher denied the allegations made by Tariq, Ruby, and Hank, who they named as their “second accuser.”

“It’s not like I have anything to hide,” they told the Daily Dot. “I know what I didn’t do.”

Rusher also said that they wished that #OrigamiCamp attendees would have contacted them before posting about them online.

“If I put you in such danger. I would have loved a phone call. And I would have wanted to know, you give me the play by play. I would have apologized for anything I did,” they said. “But I know for a fact because I replay that moment [referenced by Ruby as “the plant room”], every time in my brain. I did nothing.”

With regard to the videos they posted when the allegations first surfaced, they said that they’re a “quick to anger person” and that they were dealing with a sick family member at the time of posting.

“I know the first video I released was a lot of the yelling and the crying and the screaming,” Rusher said.

In response to any paperwork signed in advance of the weekend, Rusher said that they signed an NDA, but was not given a contract to sign affirming that they would only be working on lighting, as explained by Venti. They also said they felt the NDA was “broken” when Natasha Noel, Tariq, and Luna spoke with Mashable in September.

Rusher also told the Daily Dot that they felt excluded throughout the weekend, and saw the allegations as another form of hostility by the #OrigamiCamp group.

“When it came out that they were calling me a predator, it just felt like y’all didn’t like me being there from way back then,” they said.