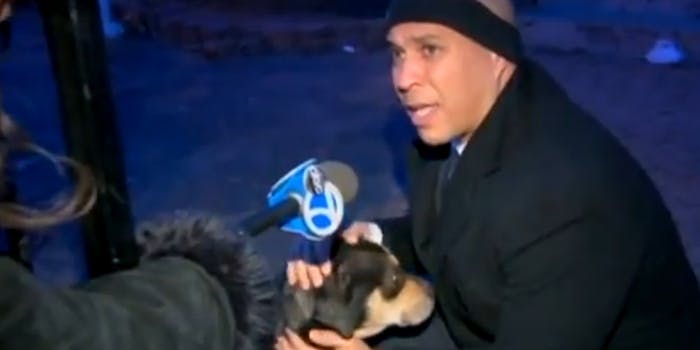 Cory Booker once again answered the Bat-Signal to swoop in and rescue a poor dog.

The Newark, N.J., mayor was alerted on Twitter to a dog locked in a small crate for four days. As is his way of governing, he took a hands-on approach to tracking down and rescuing the animal, along with some assistance from Animal Control.

Where? I’ll go investigate now. RT @shankdog3000: Is there anyone who can stop the torture of a dog? There’s a dog locked in a small crate

I’m on my way right now MT @shankdog3000: Goldsmith ave. The neighbor pointed out that the dog has been there 4 days.

I’m on the scene & Located the dog. U were right too report. Inhumane & cruel. Working 2 get the animal secure now. Thank u MT @shankdog3000

Thanks @shankdog3000 for compassion. And also thanks to Abdul Ali from Animal Rescue who was able secure & transport the dog to a shelter.

Booker has frequently stepped in to personally resolve tough situations. Last year, he raced into a neighbor’s burning home to save her. Back in January, he found out about a dog left in the cold through Twitter and kept the pup warm while tracking down its owners. The mayor also stepped in to help Newark residents in the wake of Superstorm Sandy, helping locals out with food.

Booker is running for Senate, with a special election set for October following the death of incumbent Frank Lautenberg. Stunts like rescuing dogs through Twitter might go a long way in endearing him to the electorate.