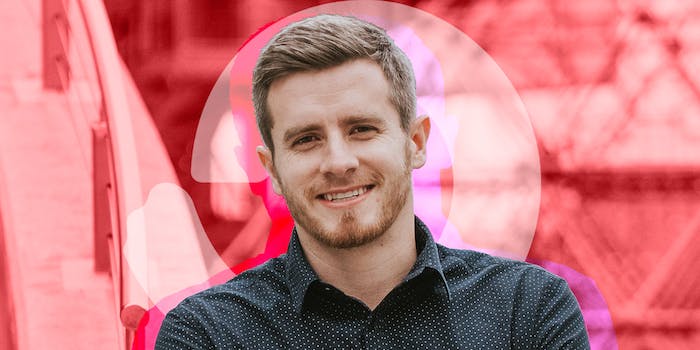 'Email is the constant all the way through the creator economy.'

We’re sitting down with leaders on the business side of the creator economy to get their best advice for creators looking to launch and develop their careers. This week, we spoke with Nathan Barry, the founder and CEO of ConvertKit.

We spoke with Barry about how his experience as a creator informed the founding of ConvertKit; what features ConvertKit offers; its new sponsor network program; how he thinks creators should combine their email and other social media strategy; and more.

Nathan Barry is a creator himself, known for his visual design, books, public speaking, and podcast. His podcast, The Nathan Barry Show, is particularly well-known in the creator economy, bringing on storied business leaders in the space to discuss a variety of topics including monetizing newsletters, creating online courses, growing audiences, and attracting sponsors.

Barry found his start as a creator years into his career as a software designer for web and iOS apps. Barry fell into the blogging world after releasing eBooks based on his software design experience, including The App Design Handbook in 2012. He then wrote a book about self-publishing in 2014, called Authority, which explored how to build an audience and make money as an author.

“I love the self-publishing world. Blogging, building a newsletter,” Barry said. “In 2012, 2013, Instagram was growing like crazy. Facebook was huge. I thought that social media was where all of the sales and the audience was gonna come from—and I was blown away that email was driving more sales and more conversions than all the social channels combined.”

Barry said he wanted to make it simpler and easier to do basic tasks as an email-based creator—like giving away free digital downloadables, or sending out automated email alerts to pitch books and online courses to followers. He said other email tools on the market made it too “complicated” for creators—including himself—who sometimes would have to modify code to get the email features they needed.

In 2013, Barry said he set out to build an email tool—for creators and by creators—harnessing email practices Barry and his other friends gleaned from their own careers. The ConvertKit team, bootstrapped and not supported by venture capital, began to add automated email sequences, audience research, and commerce tools specific to creators to an all-encompassing email marketing platform.

Nine years in, ConvertKit touts that it is still 100% financed by customers. About two years ago, it launched ConvertKit Commerce, which allows creators to sell products like courses, books, and paywalled content. The company has continued to build out new features, including recently launching a pilot program for an automated sponsor network to connect email-based creators and advertisers.

The ConvertKit Sponsor Network pilot program is open for applications for weekly newsletter writers with over 10,000 subscribers, according to its website. The service takes care of sourcing sponsor deals, negotiating contracts, campaign reporting, and billing and invoices, in exchange for a 20 percent cut of ad revenue earned.

Barry said he is both the customer and creator of this product, personally using the ConvertKit Sponsor Network for his own newsletter that goes out weekly to around 26,000 subscribers. He said he receives $800 to $1,200 per email he sends each week from sponsored content revenue without having to do extra work communicating and negotiating with brands.

Barry said he encourages the creators on the ConvertKit team to test out new products to find bugs and other issues. He said advertisers have “total control” over where their ads are placed, and all creators participating in the program—including himself—pay a commission and processing fee on advertising revenue generated.

He said this service is great for email-based creators, who despite having highly engaged fans, don’t have the same kind of agents, managers, and brand deals as other social media influencers.

“In the influencer world on Instagram or YouTube, being represented by a manager or an agent is a lot more common. Whereas in the email space, not a lot of people who are writing email newsletters have that type of influencer management. So it’s not really competing with existing managers, it’s that most people in the newsletter space don’t have that right now and they don’t have access to the same level of brand deals,” Barry described. “Although there are plenty of options for monetization, like paid coaching, courses, paywalled content, and so on, in reality the bulk of money earned by creators is through advertising, brand deals, and sponsorships.”

One creator currently involved in the ConvertKit Sponsor Network is Khe Hy, the creator behind an entrepreneurship blog, newsletter, and online course called RadReads, which boasts over 30,000 readers. Alongside money earned through the sponsor network, Hy told Passionfruit he primarily uses ConvertKit for its audience segmentation abilities—which helps him land online course sales by sending the right emails to the right fans.

“We sell online courses, live courses, four times a year. And so throughout the year we are nurturing leads through evergreen sequences, we are doing segmenting, we are doing launch emails, we are running A/B tests on subject lines—that would be the main way we use ConvertKit to monetize,” Hy said.

“Evergreen” sequences are automated email sequences that don’t expire at a certain date—an example would be an ongoing eBook promotion email that automatically sends whenever a new subscriber signs up for a creator’s newsletter. Users can tease out what kinds of automatic emails get the best engagement by testing different elements, like varying subject lines in so-called A/B testing campaigns and reviewing the resulting analytics that appear.

Hy advises creators looking to make a living from their work on ConvertKit to utilize the platform’s data and analytics capabilities to conduct audience research and come up with ideas for how to monetize.

“From that research, you will understand [your audience’s] pain points, their dreams, their aspirations, their struggles, which helps you intuit and helps you create new products that solve those challenges, and then it helps you market those products,” Hy said.

Another creator—travel blogger, TikToker, and Instagram influencer Gabby Beckford (@packslight)—told Passionfruit she also chose to move to ConvertKit from another email tool because of its audience segmentation, automation, and other newsletter features. Beckford said she uses the platform to let her most engaged audience members know about her new digital product releases, upcoming sales, brand partnerships, and other updates.

“One of my favorite features on ConvertKit is sequences, because they let me serve my audience consistently when I might be having an inconsistent moment in life! I also love the team feature so my team can support me with my email newsletter,” Beckford said. “Through consistent email sequences I am able to build trust with new audience members who perhaps found me through my TikTok or Instagram (@packslight) and want a deeper dive into who I am and what I do.”

Beckford expanded on how she uses the platform to form deeper connections with her biggest supporters.

“By building relationships through education, entertainment, and empowerment, I build long time customers who trust me and my knowledge and want to invest in our community,” Beckford said. “No matter what social media website glitches or shuts down completely, my email newsletter is composed of my true, core audience who I want to show up for.”

Barry agreed email is a more personal medium than some other social media platforms, which trade a deep audience connection for a larger reach.

“There’s a lot of artists that track things like: these are my closest fans, this is what city they’re in, this is what they’ve purchased. The level of detail is way beyond what you can do with social networks,” Barry described. “[Also] a lot of creators get the best engagement with their audience when it just feels like they’re writing to a friend…We built an interface, or a writing experience, that made that really easy to do.”

While Barry thinks email is the best platform to get personal with fans, he said it’s a mistake for creators to only focus on email, which has low potential for organic audience growth. He pointed out that newsletters, unlike social media platforms, don’t have “discovery engines” built in—like Twitter threads, Instagram Reels, and TikTok videos which go viral and attract a lot of eyes.

On the flip side, he advised newsletter-focused creators to not spread themselves too thin across a variety of social media platforms to get their names out there, and instead hone in on one platform to try to build a following.

“For me personally as a creator, I have accounts on lots of platforms. But Twitter is where I’m focused for discovery…and email is where I’m focused for connection,” Barry said. “Find the platform that is most native for you as a creator…really focus there, and then have a good system, whether it’s through additional content that you’re giving away, email courses, free resources, and all that, to drive people back to your email list.”

In closing, Barry said he believes the future of the creator economy is all about creators owning their relationship with their fans—and he thinks email is better poised than major social media platforms to provide that ownership.

“Email is the constant all the way through the creator economy. If you think about these other social networks that dominate a lot of the conversation, they come and go,” Barry described. “Email is the platform that brings creators the closest to the fans and gives the creators the most control and the most ownership.”

A previous headline for this post stated that Barry is ConvertKit’s co-founder. The headline has been updated to show that he is the sole founder.

Are you a business leader building tools for creators? Email [email protected] for a chance to get featured in an upcoming newsletter.