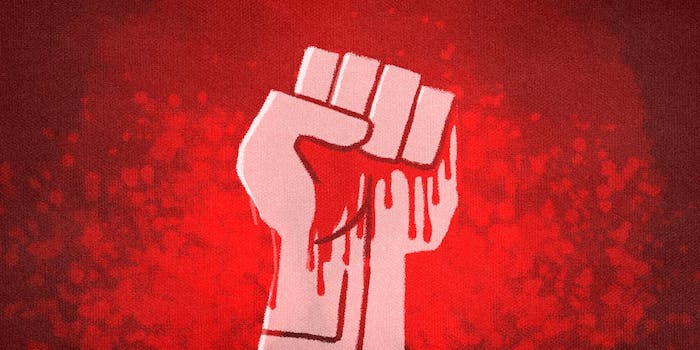 The conservative fear of government is putting American lives at risk.

One week after a white supremacist shot nine people in Charleston, South Carolina’s famed Emanuel African Methodist Episcopal Church, a study has found that violent right-wing extremists like Dylann Roof are the largest threat to Americans, greater than even jihadi terrorists. According to the New America Foundation, 19 out of 26 ideology-driven attacks within the United States since 9/11 were committed by anti-government militia types or determined white nationalists like Roof. The study enforces the warnings of a February report from the U.S. Department of Homeland Security, which warns of such “Sovereign Citizen” attacks against police and government officials.

The study also comes just as the Charleston murders have spurred a national conversation about hate groups, one that is focused perhaps too intently on the symbolic victory of banning Confederate flags from retail stores and public spaces. As the NAF and the DHS have found, the true focus should be on hate groups that are fostered online on vile subreddits and forums like Stormfront and video sites like Podblanc.

While both Stormfront (a white supremacy forum founded by a former KKK Grand Wizard) and Podblanc (a YouTube for racists founded by a Canadian neo-Nazi who claims “racism is my religion”) have distinct rules against violent threats, they’ve both been tied to numerous violent hate crimes and mass killings. These groups and the killers they foster are encouraged through their delusional racism in the bowels of the Internet, and failing to recognize them as a distinct problem offline has allowed them to become dangerous.

Any attempt by U.S. Homeland Security to draw attention to right-wing extremists has typically been met with ire by Republicans who feel their political beliefs are being criminalized by an overbearing federal government. In 2009, DHS declassified a report about the dangers of right-wing extremism, citing concerns over increased recruitment among these groups due to the Great Recession and the election of the nation’s first black president. The report was not only sobering, citing that DHS had no information of plans for terrorist attacks, but ended up being true. The Southern Poverty Law Center found most hate groups applauded Barack Obama’s election victory because they believed it would boost recruitment—and they were right.

Meanwhile, in just the last five years, users of the website Stormfront alone have committed more than 100 lethal hate crimes.

What should have been a serious warning from government agents who would know better became fodder for conservatives looking to stoke fears about a new liberal president. Sen. John Boehner called the report “offensive and unacceptable” stating DHS was labeling “American citizens who disagree with the direction Washington Democrats are taking our nation” as “terrorists.”

Columnist and frequent Fox News host Michelle Malkin said it was a “hit job” against conservatives and cited the DHS’s supposed lack of concern for eco-terrorists as evidence of left-wing bias infiltrating the agency. Except those groups are nowhere near as active as right-wing extremists.

Conservatives are fond of citing a 2004 speech given by the deputy assistant director of the Federal Bureau of Investigation which called eco-terrorist groups like the Earth Liberation Front “the most active criminal extremist elements in the United States,” citing online threats made against food producers and farmers. Except these threats never came to fruition—eco-terrorists are responsible for zero deaths in the United States. Meanwhile, in just the last five years, users of the website Stormfront alone have committed more than 100 lethal hate crimes.

Such misplaced priorities and derision against common sense law enforcement initiatives inherently protects violent hate groups from the investigation and legal action that could make Americans safer. In an effort to build upon fears about the federal government, conservatives are also defending the delusional ideas of those like Roof who want to widen the racial gap in America through violence—thereby making it harder to have a real discussion about how to combat these groups and prevent frustrated young men from being allured to their message.

A healthy skepticism of government actions never hurt anyone, but purposefully portraying the federal government as an antagonist to build up conspiracy theories only empowers those who wish everyday Americans harm. According to the SPLC, the last two decades have seen a massive explosion of right-wing conspiracies wherein the “United States government itself is viewed as a mortal threat to everything from constitutional democracy to the survival of the human race.” While some of this can be attributed to the spread of the Internet, it’s also true that mainstream Republicans have done little to distinguish these fears and, at worst, have actively helped them along.

Spring saw these conspiracy theorists rewarded in a major way when Texas Gov. Greg Abbott ordered Texas National Guard troops to observe the actions of federal troops undergoing a multi-state training operation known as “Jade Helm.” Before Abbott’s decision, the idea that the U.S. government was actively training for a militarized takeover of its population was left to fringe websites, but a recent poll found that 39 percent of all Texans believe Abbott was right to take preventative measures.

Abbott’s move could mostly be seen as another nut of persecution thrown to the squirrels by a political party long used to doing so. Except that fringe includes the most violent ideology in America today. While some are surely basement-dwelling bloggers, it’s apparent the far right has a violent terrorist element that feeds off panic and catastrophic thinking around the same kind of worries.

Barack Obama attracted controversy in 2008 when he called poor white conservatives “bitter” from a failing Bush economy: “They cling to guns or religion or antipathy toward people who aren’t like them or anti-immigrant sentiment or anti-trade sentiment as a way to explain their frustrations.” Despite the hit this gave to Obama’s campaign, one would be wise to remember Michael Kinsely’s advice that “a gaffe is when a politician tells the truth.”

The right has long benefitted from this bitterness by painting immigrants and minorities as a criminal “other.” One such method is focusing on the inevitability of whites becoming a minority in the U.S., a frequent topic on Fox News and the Drudge Report. Republican presidential candidate Donald Trump recently found himself using this schtick rather blatantly when he said of Mexican immigrants “They’re bringing drugs, they’re bringing crime, they’re rapists, and some, I assume, are good people.” This is no mistake: A study published in Psychological Science by researcher Jennifer Richeson found whites exposed to data about the likelihood of caucasians becoming a minority in the U.S. were more likely to favor conservative policies on immigration, crime, and gun rights.

Stoking far-right paranoia not only enables these fears but legitimizes them, making it increasingly difficult to embrace real awareness into the dangers of racist or far-right beliefs. If Republicans are comfortable with their position away from people like Roof, they should embrace the sanity that violent extremists are lacking instead of using it for political gain. A Republican Party that helps to avoid delusional fears, not embrace them, could actively make our country safer by not rewarding the ideology of hate groups with attention and justification.