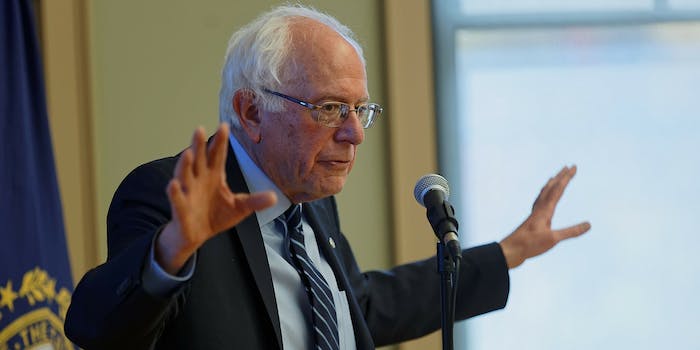 Who won last night's CNN contest between Sanders, Clinton, and their opponents? The Internet.

The first #DemDebate last night was, refreshingly, a spirited exchange of important ideas and policies, unlike the egomaniacal, mean-spirited, rhetoric-spewing GOP slugfests that have so far transpired. This, even despite CNN’s silly showcasing of the last night’s event as if it was a Vegas prizefight.

The debate also highlighted just how important it is to pressure candidates, including via loud protest, to focus on the issues progressives care about. That was evident literally a few minutes into the debate when Hillary Clinton, in her opening remarks, was the only candidate to focus on the battles ahead over full equality for LGBT people:

[T]his is about bringing our country together againAnd I will do everything I can to heal the divides—the divides economically, because there’s too much inequality; the racial divides; the continuing discrimination against the LGBT community—so that we work together and, yes, finally, fathers will be able to say to their daughters, you, too, can grow up to be president.

Those few words were impressive because Clinton has been criticized for being slow to embrace marriage equality in the past—and more importantly, she has been pressured in recent months to speak out more forcefully on LGBT discrimination. Responding to the pressure, Clinton recently discussed the importance of adding protections for LGBT people in housing, employment, and public accommodations to the 1964 Civil Rights Act, something even President Obama appears to be reticent about doing at this point.

The issue didn’t come up for discussion in the debate last night, but that’s because it wasn’t raised by the moderator: For Hillary Clinton’s part, she laid it out as an agenda item in her opening remarks, the only one to do so.

And she had to do that, considering those on the stage with whom she was debating. Sen. Bernie Sanders (I-Vt.) was one of only a handful of legislators who voted against the Defense of Marriage Act as a House member in 1996, a bill that President Clinton signed into law. Former Maryland governor Martin O’Malley pushed and signed a marriage equality bill in his state, as did former Rhode Island governor Lincoln Chafee.

Both men touted these successes during the debate last night. It’s another example of how pressure from LGBT activists has shown candidates that embracing equality, rather than ducking from the issue, can be a win for them.

From Black Lives Matter to the DREAMers, the debate underscored how vigorous protest is vital in making Democratic candidates talk about the issues, just as protest pushed President Obama to act on LGBT issues, as Kerry Eleveld lays out in her new book, Don’t Tell Me to Wait: How the Fight for Gay Rights Changed America and Transformed Obama’s Presidency.

There was criticism from some progressives of the Black Lives Matter protest at the progressive gathering Netroots Nation last July in Phoenix, when activists interrupted the appearances of both Sanders and O’Malley. But last night both candidates, rather than offering the bungled and embarrassing responses they had at Netroots—when O’Malley actually said ”all lives matter”—spoke in detail on the issue of police brutality against African-Americans, having done their homework.

And Hillary Clinton, having been hounded by the DREAMers, the young immigration reform activists who challenged her even before she announced she was running for president and who are rightly continuing to do so, spoke to the issues and championed the DREAMers and their cause.

Surely some of this was pandering as well as campaign strategizing to make sure the candidates didn’t step on any land mines. And there were less than adequate responses at times on issues affecting all of these groups, or just vague responses. But the fact that the candidates are responding at all validates how important protest is—including protest against those considered our “friends”—and how only those who speak up, loudly, will be able to make change.

Photo via Phil Roeder/Flickr (CC BY 2.0) | Remix by Jason Reed