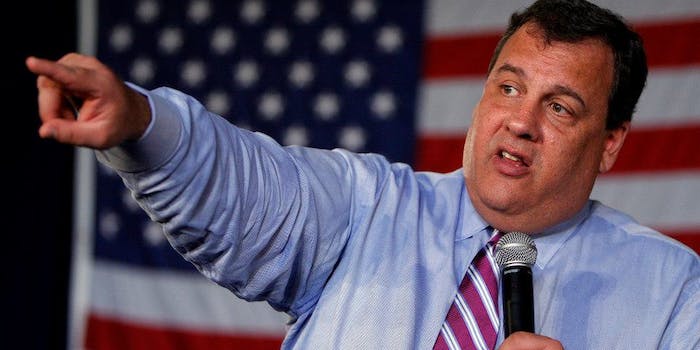 After being in hot water for the last 12 months, Chris Christie has taken an ice shower for charity.

In a video posted to his Facebook page, the New Jersey governor is seen standing on his lawn, dressed in shorts and a T-shirt, accepting the “Ice Bucket Challenge,” a popular Internet campaign to raise awareness of the Amyotrophic Lateral Sclerosis (ALS) neurodegenerative disease, which involves people having buckets of ice water thrown over their heads.

The Bridgegate scandal of 2013 rocked Christie’s administration after it was revealed that his staff caused a traffic jam to deliberately inconvenience the residents of Fort Lee, N.J., for political reasons. Many Garden State residents would therefore have paid good money to be the ones throwing the water. However, Christie decided not to explore that fundraising option, instead letting his two children do the honors.

Christie accepted the challenge from ice hockey star Scott O’Neill of the New Jersey Devils,  then laid down the gauntlet to Facebook founder Mark Zuckerberg, Tonight Show host Jimmy Fallon and New Jersey state senator Cory Booker. The three now have 24 hours to get wet on video or donate $100 to the Strike Out ALS campaign.

President Barack Obama recently declined the challenge, while Justin Timberlake and Tiger Woods are two of the many stars to have accepted the cold showers, helping to raise more than $2.3 million for charity.