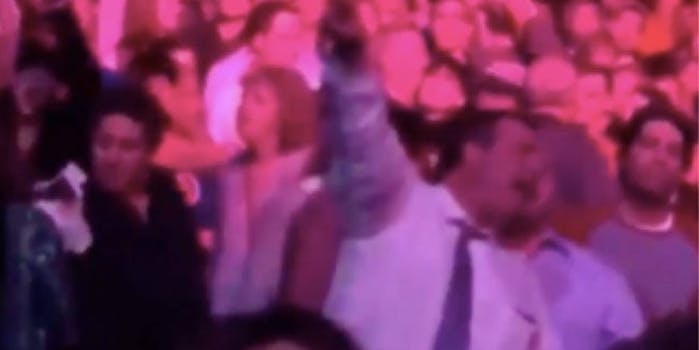 This is the pure essence of Chris Christie.

Through it all, two things have remained consistent. One, he is a dorky guy from New Jersey. Two, he loves Bruce Springsteen, even if Bruce doesn’t love him back. Shouting along at a Springsteen show Monday night, Christie did a dance that encapsulates all of these qualities perfectly—the dance of his people.

"Trapped: The Saga of Chris Christie and the George Washington Bridge" pic.twitter.com/gddbEZN0ju

Christie has attended more than 100 Springsteen concerts in his lifetime, but these are the clips that finally connect his fraught history as a Bruce fanboy with his reputation as the embodiment of Dad Dancing.

There could not be a dadder, more New Jersey man or dance than the one witnessed Monday night. After a years-long process of becoming, it’s finally here: the Christie singularity.

Update 3:04pm CT: Christie also sang along with “Purple Rain,” which the Boss opened with as a tribute to Prince. In case you were wondering.