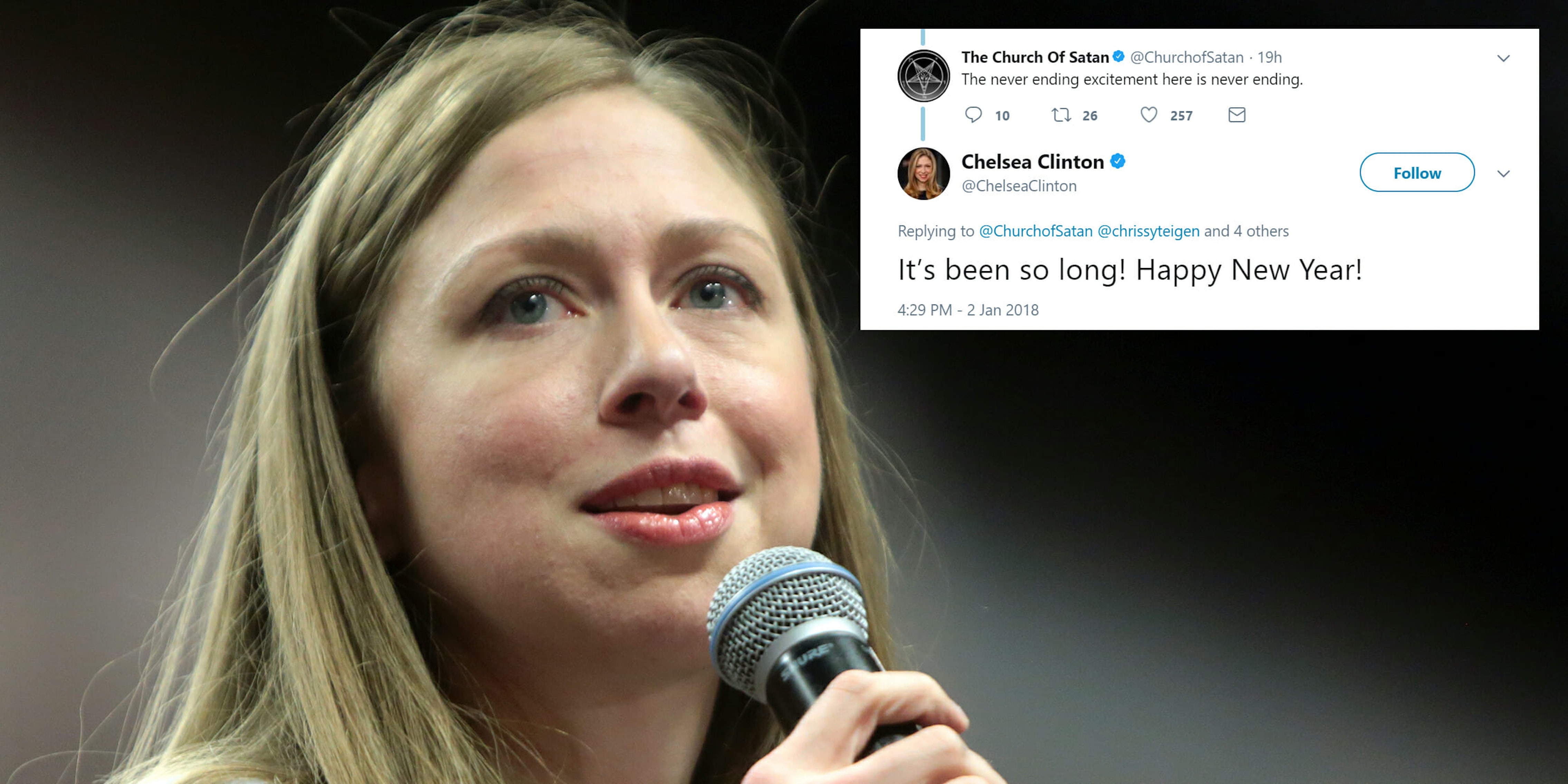 Chelsea Clinton refuses to back down from the internet trolls

On Tuesday; a strange series of tweets involving Hooters, model Chrissy Teigen, and a right-wing conspiracy theorist led to Chelsea Clinton wishing The Church of Satan a Happy New Year on Twitter.

It started when right-wing conspiracy theorist Liz Crokin tweeted pictures of model Chrissy Teigen with her husband John Legend and their one-year-old daughter Luna. The pictures show Luna in various Halloween costumes, including Alice in Wonderland, a hot dog, and a pineapple. In one of the pictures, a pizza emoji can be seen and this, Crokin implies, is a reference to Pizzagate, the bizarre theory that Hillary Clinton and others were running a child sex ring out of the basement of a Washington, D.C. pizza restaurant. The now-deleted tweet scared Teigen, who posted screenshots of the tweet and some of its responses.

Alright. I debated saying something about this but I’m pretty disturbed over here. The fact that there are people with these…thoughts…is really scary. pic.twitter.com/9OtWKHxUgR

Anyhow. I really am not enjoying that shit as the last thing on my timeline soooooooooo hello, normal people. Love you.

This is when Clinton, who’s dealt with more than her fair share of online harassment, jumped in to show her support.

Chrissy, sending you & beautiful Luna a huge hug. It is awful & never ok when people threaten or demean any child. I’ve lost count of the Twitter accounts who’ve threatened Charlotte with #FGM. While I never bother to report threats against me, I now report every one against her.

Crokin, whose Twitter verification has now been removed, didn’t back down on her claim, and accused Teigen of associating with people “who rape, torture & traffic kids.”

Things got even weirder from there when, according to the Daily Caller, an account called @roughhooters responded to the conversation, leading to that account being suspended.

After someone alerted Hooters to the tweet the restaurant chain responded to say they were not affiliated with the account.

We're definitely not endorsing this account nor does it have any relation to our company.

Which just led to more confusion for Teigen.

what. is. happening. hi hooters!

Again Clinton responded to let Teigen know that his kind of weirdness is par for the course. Clinton noted that last year she’d been mentioned in tweets involving The Church of Satan.

The Church of Satan, never one to pass up on an opportunity for publicity, responded by saying “The never ending excitement is never ending.”

At this point, Clinton probably threw her hands in the air, said “fuck it,” and wished them a Happy New Year.

And the Church responded in kind.

For the record, The Church of Satan claims to be atheist and doesn’t worship any sort of supernatural being. “Satan to us is a symbol of pride, liberty and individualism” they say on their official website, “and it serves as an external metaphorical projection of our highest personal potential. We do not believe in Satan as a being or person.”

But that didn’t stop Infowars from saying “Former first daughter joyous over discussion with Satanic organization.”

Clinton, a Methodist married to a Jewish man, probably had no intention of endorsing the Church or its beliefs.