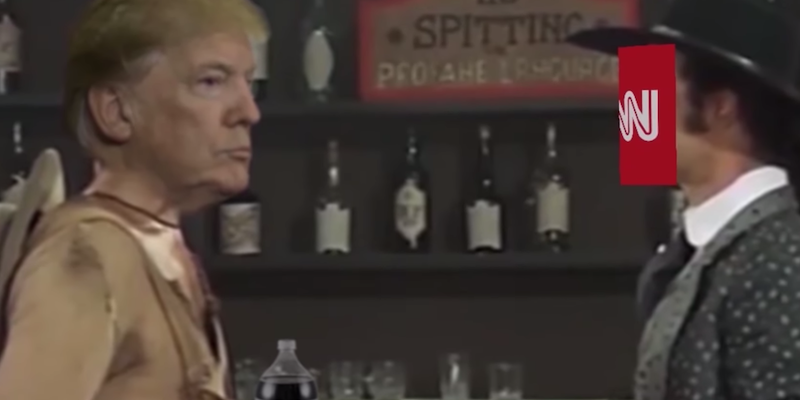 Carpe Donktum, a conservative whose work has been retweeted by the president in the past, photoshopped President Donald Trump into a spaghetti western movie scene where he slaps around a bad guy who was depicted as CNN journalist Jim Acosta.

After Carpe Donktum posted the clip to Twitter, Krassenstein, co-founder with his twin brother of the liberal blog Hill Report, called on his followers to report it, claiming that Carpe Donktum made a video where the president shot a member of the media.

Replies to Krassenstein’s post show dozens of followers saying they had subsequently reported the meme. Soon after, Carpe Donktum’s Twitter account was suspended. Ali Alexander, a colleague of Carpe Donktum’s at pro-Trump media outlet Culttture, explained that the creative was being asked to either delete the tweet or be banned from the social network entirely.

The incident coincided with actions throughout the past week by Facebook and Instagram to permanently ban multiple right-wing figures like Laura Loomer, Milo Yiannopoulos, and Alex Jones. In the past couple of days, several right-wing Twitter users, like activist David Horowitz, have also faced suspensions in what some conservatives are calling a purge. Twitter had reportedly claimed Horowitz’s suspension was a glitch, yet after reinstating his account he was once again suspended.

Some on the right believe that the banning of influential conservative figures across platforms is part of a wider “Big Tech” strategy or conspiracy to “hamstring” Trump’s 2020 presidential campaign.

In a bid to fight back in this instance, conservatives are demanding that Krassenstein be suspended from Twitter for encouraging users to mass-report Carpe Donktum’s tweet.

He slaps the press around, the gun is used as a distraction then at the end of the clip in defense.

This is violation of @Twitter TOS. Hopefully @krassenstein will be suspended for this.

On his return to Twitter, after deleting the tweet in question, Carpe Donktum also blasted Krassenstein for asking followers “to fraudulently report.”

The Daily Dot contacted Twitter about the suspension and Krassenstein’s call for coordinated mass reporting but did not receive a response before publication.