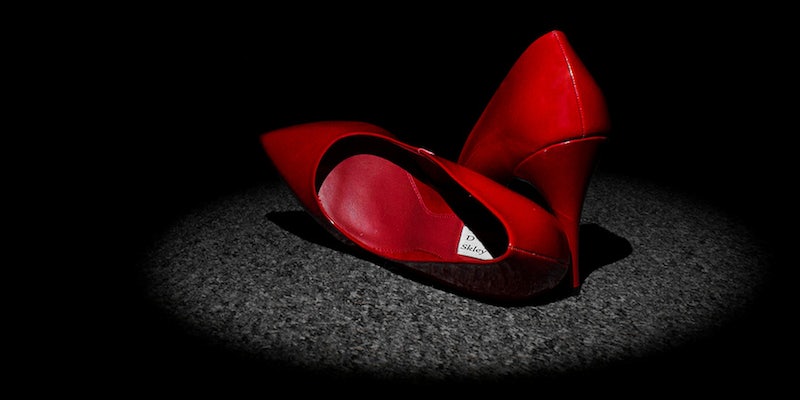 Hey, film festival organizers, you try walking all day in these things.

Imagine traipsing around all day in a sun-baked seaside town, traveling from press conference to business meeting to lunch on the terrace to red carpet premiere. Picture yourself trying not to wilt in your tight dress and just-so makeup. Think about how exhausted you would be at the end of a day spent trying to simultaneously get shit done and look pretty.

Now imagine doing all of that while teetering around on sky-high heels, your torso tipped forward at an uncomfortable angle and your points of contact with the earth reduced to a few square inches at your toes and a less-than-dime-sized patch of heel.

This is what it’s like for many of the women attending Cannes. A strict dress code apparently dictates that women must wear heels of a certain height in order to attend events. According to Screen Daily, a film industry publication, several women have recently been denied entry to screenings for wearing flats. These women—at least two of whom have medical conditions that make it impossible for them to wear high heels—were apparently told to leave and go buy “appropriate shoes” before returning.

Imagine being turned away from what is essentially a business event for the industry you work in just because the heels on your shoes aren’t high enough.

Valeria Richter, a film producer, writer and Cannes regular who was attending the premiere for Gus Van Sant’s Sea of Trees last week, told the U.K.’s Telegraph that she was stopped not once but four times by festival officials admonishing her for her footwear. Each time, the staff told her that she would need to change her shoes. Each time, Richter had to explain that she was wearing flats because her left big toe and part of her foot had been amputated two years ago.

One of Richter’s colleagues who cannot wear high heels because of a metal plate in her foot has had similar experiences with festival staff. And yet another acquaintance was forced to change her shoes because the heel on her sandals wasn’t high enough.

Richter is not the only one speaking out. Asif Kapadia, director of Amy, a documentary about Amy Winehouse, tweeted that his wife was also nearly prevented from a screening because of her shoes, although she was eventually let in.

@muirkate happened to my wife (eventually let in)

After a strong backlash against the festival’s dress code on social media, Thierry Frémaux, the director of the Cannes Film Festival, took to Twitter to do some damage control. “The rumor saying the festival insists on high heels for women on the red carpet is unfounded,” he said, clearly hoping to shut down the Twitter backlash.

Imagine being turned away from what is essentially a business event for the industry you work in just because the heels on your shoes aren’t high enough.

From a public relations standpoint, it’s an odd choice to flat out accuse several prominent industry women and at least one man of lying. With multiple people going on record with similar stories of being denied entry to film screenings, denying everything is a pretty bold strategy. By stating that the “rumor” about mandatory high heels is completely false, Frémaux is implying one of two things: that his staff have conspired behind his back to create their own festival dress code, or that the people saying they’ve been turned away from events are just making it all up. Either way, it’s not a good look for him.

Frémaux’s assertion that these women are lying about their experiences is especially brutal given that Cannes has deliberately chosen gender equality as one of the main themes of this year’s festival. The opening film this year, Standing Tall, marked the first time since 1987 that the opening film was directed by a woman, only the second opening film directed by a woman in the festival’s history. Variety and UN/Women sponsored a special panel about gender equality in the film industry.

Cannes has apparently gone to great lengths this year to make sure that they appear to be promoting women in film, at a time when the American Civil Liberties Union has called for an investigation into the rampant gender discrimination in Hollywood at large, an industry that is overwhelmingly white and male and continues to stay that way. In a recent essay for the Huffington Post, writer Lauren Duca argued that Hollywood is “so overpowered by straight white men that it feels like a Tea Party convention at a country club in Connecticut.”

The film festival might be fighting inequality outside its ranks, but what does any of that matter if they don’t believe the women speaking out about the discrimination they’ve faced at the festival itself?

It’s unbelievable that a woman who has had part of her foot amputated now has to endure being stopped several times a day to explain her footwear. And though festival staff seem to have accepted Richter’s explanation about her amputation, it’s hard not to wonder about how other women with invisible disabilities will be treated. Will their their stories believed? Or are they being turned away and told to go buy taller shoes?

The film festival might be fighting inequality outside its ranks, but what does any of that matter if they don’t believe the women speaking out about the discrimination they’ve faced at the festival itself?

While Screen Daily weakly mentions that there are some aspects of the dress code that only apply to men—for example, men are expected to wear bow ties—the comparison between these and the requirement that women must wear high heels is completely false. There are few disabilities that would prevent men from wearing bow ties, and there are no accounts of men being denied entry to screenings because of the shape of their cravats.

Sadly, the same can’t be said for women and shoes. Insisting that women wear high heels is an accessibility issue; Richter and her colleague’s experiences make that very clear. If Cannes truly wants to promote equality at their festival, then they should begin by revising their outdated dress code. At the very least they need to hire someone who understands just how downright glamorous the right pair of flats can look.

At the end of the day, it doesn’t matter how many opening films directed by women the festival presents if they’re going to continue enforcing gendered, ableist rules about dress. Even the best, most celebrity-laden panel on gender equality can’t counter the everyday sexism women face while having their appearance policed by festival staff.