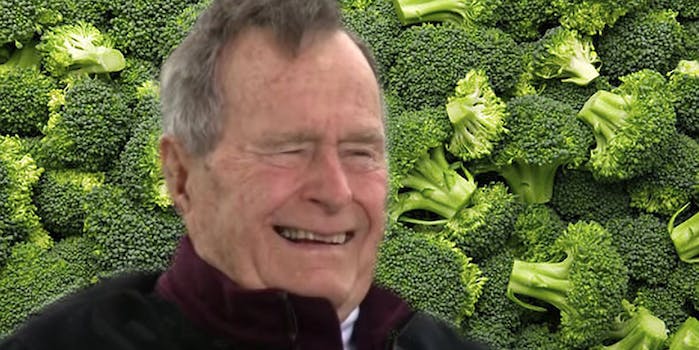 Grade-A broccoli hater and 41st President of the United States George H.W. Bush just shut down a little kid and his favorite vegetable.

5-year-old Cooper penned a neatly written letter to the former president bragging about his dinner, which included the green, buddy broccoli. “Broccoli is really good for you,” Cooper explained. “I wish you liked broccoli like I do.”

Proud of young Cooper's interest in healthy eating. His declared love of broccoli is genuine, if also unpersuasive. pic.twitter.com/r5wHKvigDb

The response may seem rude, but Cooper shouldn’t have expected much else. Bush is notoriously anti-broccoli; a position that remained unwavering even after broccoli growers bombarded the White House with 20,000 pounds of the green stuff.

“’I do not like broccoli,’” the then-President declared in 1990 like a petulant child. The senior Bush imposed a broccoli ban on Air Force One because freedom or something.

“I haven’t liked it since I was a little kid and my mother made me eat it. And I’m President of the United States, and I’m not going to eat any more broccoli!”

What does the former leader of the free world prefer, then? The exact cuisine a 5-year-old like Cooper would stereotypically adore. “Junk food is his lifestyle,” a former aide, Pete Teeley, once told the New York Times.

Looks like the ban still stands in the Bush household. Sorry, Cooper.