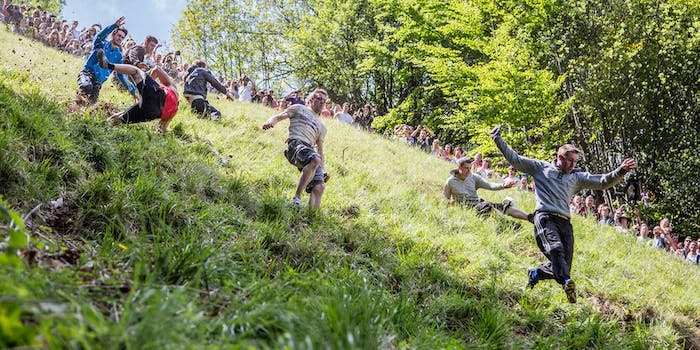 Why isn't this an Olympic event?

While Americans were busy grilling burgers and hot dogs poolside yesterday, Brits (and assorted weirdos from around the world) were gathering near Gloucester for a far stranger and more controversial springtime tradition: the Cooper’s Hill Cheese-Rolling and Wake.

The event dates back at least a century and is thought to have its origins in pagan new-year rituals, as well as an archaic system of maintaining certain property rights. Each year, despite threats of personal liability and repeated attempts at a police crackdown, dozens of people run down the steep, uneven hill after a wheel of Double Gloucester cheese weighing roughly eight pounds.

Because these races have become so popular—and participants are so often injured—there is always disagreement about how to manage and provide first aid to the festival.

According to Metro, the 2014 contests (in which people plummeted 200 yards at speeds up to 70 miles per hour) witnessed a broken collarbone, a snapped wrist, a fractured ankle, and a dislocated shoulder, in addition to many other cuts, scrapes, and bruises. Is all that pain and suffering really worth the trophy of a muddy, grass-stained dairy product?

Guess we’d have to taste it to know for sure.