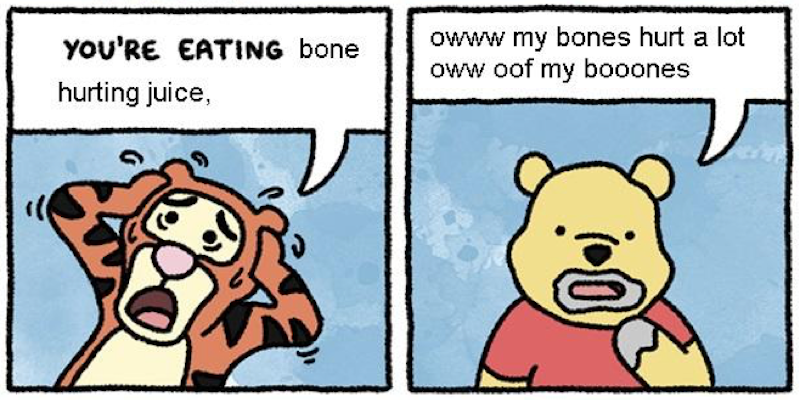 Of all the terrible things you could drink, one of the worst is bone hurting juice, a juice that causes intense pain in human bones. Bone hurting juice isn’t real, fortunately for all of us, but it is the hottest, strangest new meme of April.

The concept of bone hurting juice first entered the zeitgeist in 2016 via the Facebook page “Fun Silly Drawings for Fun Silly People Haha,” in the form of a “Sweet Jesus, Pooh!” comic.

The original, grim punchline of the comic, created by Safely Endangered, was “That’s not honey! You’re eating my father’s ashes,” but it’s been changed innumerable times over the years by creative memers. “Bone hurting juice” seems to have stuck more than most, though, and now it’s taken on life outside of the comic.

Following on from the original comic, bone hurting juice seems to have taken the form of an anti-joke: the juice hurts your bones, as its name would imply. There’s no trick, and no real punchline (other than “oof owie ouch”).

Here are a some typical bone hurting juice memes that demonstrate the anti-joke application:

Like any trendy new meme, bone hurting juice has also been inserted into other memes, like loss.jpg:

This basic formula is the place to start for your first bone hurting juice meme—just add “oof owie ow” and you’re good—but paradoxically, a bone hurting juice meme doesn’t have to mention the juice at all. It just has to share the same ironically deadpan style of humor. One of the moderators of r/bonehurtingjuice laid out this principle in a post for people who weren’t quite grasping the intent of the joke:

“The nature of /r/bonehurtingjuice memes are very complicated in what makes them funny and shouldn’t be boiled down to le random. In the current state we seem to be missing this idea. We need less random, and more advanced irony.”

Here’s the example he provides of a successful contribution to the genre:

This is a painting of English writer Samuel Johnson, typically used as a reaction image with the caption, “What the fuck did I just read?” The r/bonehurtingjuice anti-joke version just straightforwardly describes what’s happening in the image: he appears to struggle with the small text. It’s as self-evident as “bone hurting juice hurts your bones.”

There’s also some overlap with wholesome memes, the meme genre that takes aggressive or risqué jokes and makes them about hugs and friendship. Normally, the barber meme is an excuse to make fun of someone’s unusual or absurd haircut. The r/bonehurtingjuice version is just completely straight-faced. The punchline is that there is no punchline:

Meme investors on Reddit’s r/memeeconomy are excited about the potential of bone hurting juice, including a revival of the 2016 Pooh comic.

“You know what I love about this stock?” wrote redditor Micronex last week, “It takes an incredibly normie format and applies a far-from-normie joke. This makes for a safe investment that will easily skyrocket in value.”